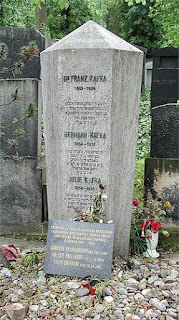 “Theoretically there is a perfect possibility of happiness: believing in the indestructible element in oneself and not striving towards it.” -- Franz Kafka

Back to my Modernism kick with a short work by Kafka. I don’t believe I’ve read any of his work since college, so it will be a nice reintroduction. I may also cover some of his short stories since I received The Complete Stories for my birthday…if not now, at least sometime in the near future. (I just realized that with The Metamorphosis and the upcoming As I Lay Dying I'm covering two of the most dysfunctional families in literature, which is saying a lot in the context of 20th century novels.)

There is a wealth of information available online about Kafka and The Metamorphosis, so the list below will necessarily be only a taste of what’s available.

The Kafka Project “was started in 1998 with the purpose of publishing online all Kafka texts in German, according to the manuscripts. The project is constantly under construction. This multilingual page is also intended to give scholars and Kafka fans a virtual forum to share opinions, essays and translations. Every detail of Kafka's world will find its place in this site, which aims to become the central hub for all Kafka-interested users.”

The site for the Franz Kafka Museum

The Franz Kafka Biography website, with many photos and links as well as information on his life

The Castle, Joseph K.'s Franz Kafka Homepage (with yet more helpful links). I believe this is another version of the site.

The diaries of Franz Kafka (an online project in progress)

A review of The Tremendous World I Have Inside My Head: Franz Kafka: A Biographical Essay by Louis Begley

The text at Project Gutenberg (translated by David Wyllie).

Ian Johnston’s version can be found at one of my favorite literature sites, johnstonia. Johnston also has a lecture on The Metamorphosis as delivered by Karl Marx.

A discussion on the difficulties of translating The Metamorphosis

I stumbled across Vladimir Nabokov's Lectures on Literature in the library recently, but haven’t had a chance to look through it yet. Here is his lecture on The Metamorphosis, with a few images of his drawings and teaching notes.

Update (18 Nov 2011): Bill Peschel has an interesting post on Franz Kafka meets the beetle, including adaptations available on YouTube.