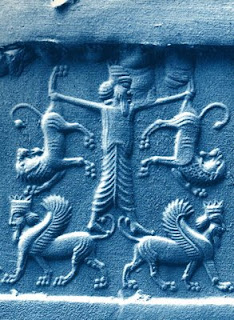 I won’t go much into recapping the story since I think I’ve provided some summaries and study guides in this post.

So instead I’ll focus on a few of the points in the story that interested me. Upon first reading the story, I found parts of it contradictory at times. Finding out the history behind the epic, or rather the various stories combined into one, helped explain some of what I was seeing. For all that follows, I am using Stephen Mitchell’s Gilgamesh: A New English Version

Some of the topics I found interesting:

Email ThisBlogThis!Share to TwitterShare to FacebookShare to Pinterest
Labels: Epic of Gilgamesh