I never imagined there would be so many sites that focused on the epic of Gilgamesh, the story of a 28th century BC king. What follows is only a small portion of what is available.

Wikipedia's entry on the epic of Gilgamesh

Texts for the epic:

From Project Gutenberg, which has "an old Babylonian Version of the Gilgamesh Epic, by Anonymous, Edited by Morris Jastrow, Translated by Albert T. Clay" (includes a lot on the history of the epic, along with an interesting chicken/egg question on which myths came first)

An excellent summary from Michael McGoodwin, complete with source, notes, cast of characters as well as a summary of the tablets.

Summary by Paul Korte, with additional detail on what sections are missing

Questions from the College of DuPage study guide

Storytelling, the Meaning of Life, and The Epic of Gilgamesh by Arthur A. Brown

A site exploring the similarities between Gilgamesh and the Old Testament

A nice overview by Dr. Fidel Fajardo-Acosta at Creighton

An excerpt read in Akkadian

Among the various translations, I read Stephen Mitchell's Gilgamesh: A New English Version

Don't confuse this with a translation--it is a literary version based on other translations. This seems to be a good introductions as his opening essay covers the work and the history of the epic. (Question for a future post: why do academics insert political comment on literary works? Fortunately it is only one line in the intro, but it grated and made me wonder if his adaptation skills are just as faulty.)

The Evolution of the Gilgamesh Epic

by Jeffrey Tigay--more for textual evaluation by scholars, but interesting for the history of the epic as well as how a text evolves.

The Treasures of Darkness: A History of Mesopotamian Religion

by Thorkild Jacobsen. There are a couple of chapters that cover the Gilgamesh epic, but even more interesting it puts the epic in context with the evolving religion of the area.

Update: Steven Riddle at A Momentary Taste of Being gives his highest recommendation to The Buried Book by David Damrosch in this review. In Mr. Riddle's words:


So, what's the big deal? Gilgamesh. But not just Gilgamesh. In the course of discussing how the epic was written, lost, and eventually rediscovered, the author shares insights about Victorian Archeology, Victorian prejudice, Asshurbanipal, Sumerian, Akkadian, Old Persion, Aramaic, Philip Roth, Saddam Hussein, among other things. The book analyzes the writing, preservation, discovery, and decoding of an epic that we have come to take for granted as part of our heritage. All the while one contemplates its potential loss and the question of how much more may be out there waiting recovery/discovery.

I see that our library has this book and I hope to review it soon. (Update added November 28, 2010)

Update 2: An excerpt from Gilgamesh: The Life of a Poem by Michael Schmidt at Lithub titled "Who Were the Scribes Who Actually Wrote Down the Epic of Gilgamesh?" (Update added November 21, 2019) 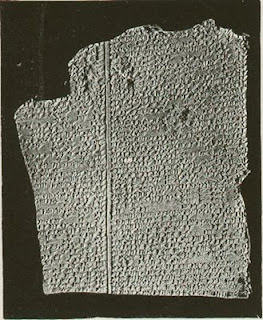 One of the Gilgamesh tablets
Picture source
Posted by Dwight at 12:42 PM

Email ThisBlogThis!Share to TwitterShare to FacebookShare to Pinterest
Labels: Epic of Gilgamesh