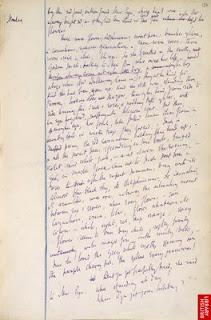 This post covers the last third of the book, starting from the narration returning to Septimus and Rezia in the late afternoon and going through the end. Septimus briefly returns to some semblance of sanity, content at home and making Rezia happy as well. His reflections on marriage provide an interesting contrast: he goes from describing being with Rezia as “alone together”, encompassing their collective happiness, to “alone forever” where his “doom” was sealed in Milan, isolated before his madness even happened. Sir William weighs in on marriage when mental illness occurs: "The people we are most fond of are not good for us when we are ill." (Interestingly enough, Woolf always recognized the assistance she received from her husband Leonard during her illnesses) The ineffectiveness of the doctors is highlighted further when Holmes, his presence enough to drive Septimus to dive out of the window, cannot comprehend why Septimus did it. Holmes calls Septimus a coward, echoing Rezia’s earlier musing that “it was cowardly for a man to say he would kill himself”.

In addition to Septimus’ madness, I’ve touched on Clarissa’s mention of her occasional depression. Peter Walsh’s self-description hints at symptoms of depression as well: “It became more and more difficult for him to concentrate. He became absorbed; he became busied with his own concerns; now surly, now gay; dependent on women, absent-minded, moody…”. One question that is implied for most of the book and then explicit at the end is why these characters go on living…what keeps them choosing life? Septimus, for a while, said it was the pleasures in life that kept him going. His view of human nature, unable to discern between the evil man is capable of and being inherently evil, drives him over the edge. Peter also concentrates on his pleasures. His flings and female problems would probably be included on that list since the pain would not be possible if he didn’t receive some joy from them as well. Preservation stays in the forefront of his mind during the day, culminating in the terror and ecstasy he receives from Clarissa. “(T)he soul must brave itself to endure” is an appropriate motto for him. And Clarissa? She despairs when Lady Bradshaw mentions Septimus’ suicide, introducing the subject of death at her party. But it gives her a chance to affirm life and the reasons she chooses to live. His death helps her to focus on life and its beauty. She realizes she loses “herself in the process of living”. But she feels no pity for Septimus, recognizing that his suicide was a form of communication, imperfect though it may be and should be recognized as such. During this musing, she sees an old woman in a window across the way preparing for bed. Her privacy and loneliness are on display and Clarissa finds it fascinating. She repeats the words from Cymbeline, implying that Septimus need fear death no more, nor should those living stop “assembling” or enjoying life.

At one point, Peter Walsh reflects on one of Clarissa’s ‘theories’

to explain the feeling they had of dissatisfaction; not knowing people; not being known. For how could they know each other? You met every day; then not for six months, or years. It was unsatisfactory, they agreed, how little one knew people. But she said, sitting on the bus going up Shaftesbury Avenue, she felt herself everywhere; not "here, here, here"; and she tapped the back of the seat; but everywhere. She waved her hand, going up Shaftesbury Avenue. She was all that. So that to know her, or any one, one must seek out the people who completed them; even the places. Odd affinities she had with people she had never spoken to, some woman in the street, some man behind a counter--even trees, or barns. It ended in a transcendental theory which, with her horror of death, allowed her to believe, or say that she believed (for all her scepticism), that since our apparitions, the part of us which appears, are so momentary compared with the other, the unseen part of us, which spreads wide, the unseen might survive, be recovered somehow attached to this person or that, or even haunting certain places after death . . . perhaps—perhaps.

In other words, we can never truly get to know someone but have to fill in the blanks to feel as if we do. In addition, we are connected to people we don’t even know without realizing it. In Mrs. Dalloway, the influence people have on each other stretches over the years, even if they have lost touch with each other. Sally Seton mentions that she owes Clarissa “an enormous amount” because “(t)hey had been friends, not acquaintances”. Distance (physical distance or time) does not matter in these connections. Clarissa's connection with Septimus, someone she never met but slid past during her walks in London, is very real.

There are so many themes in the book and I feel a little overwhelmed to tackle them here. Generational differences play an important part, going in both directions (the main characters and those younger than them as well as older). There is much more on the different types of love and communication that I haven’t even touched on—my favorite contrast is Richard’s bracelet he bought for Clarissa which she wouldn’t wear versus the necklace Elizabeth is wearing at the party (as well as his ability to tell his daughter he loves her but can’t say that to his wife). Reflections on aging are peppered throughout the book, with Peter Walsh’s ruminations about being able to savor and appreciate things more as you get older (a delightful irony as he twists and writhes in his self-induced torture). The use of external items link characters together physically (Clarissa and Septimus when the car backfires, for example) as well as provide the impetus for internal ruminations that provide the reader with comparisons and contrasts. An additional motif I enjoyed was keeping track of the characters’ response toward literature and reading.

While enjoying the book, there are two items I’ll delve into here that distracted me a little bit. The first is relatively minor. Just like in To the Lighthouse, Woolf reveals the consciousnesses of many characters. The astounding thing with Lighthouse is that each consciousness is unique, while in Mrs. Dalloway they all sound similar. Again, a minor point and I would not have noticed it if I had not read Lighthouse recently. I am still trying to work through the second point, but it touches to the core of the book instead of techniques used. So here’s a first pass at trying to explain the point that bothered me…

A major theme in the book questions the old order, looking to England as a country and empire that is diminishing. Also, the social hierarchy is repeatedly questioned and made fun of. The social critique is actually quite amusing, with accusations of snobbery being thrown about so often it soon loses all meaning. Not to mention the projection of people like Sally Seton, demeaning some characters because of their background and then accuses Clarissa of being a snob at heart. The comments on the depth of intelligence versus social status are deliciously mean. After World War I, however, I’m sure there was a feeling that the lower classes fought and suffered for the benefit of the top tiers. Septimus’ wondering of what he actually fought for captures this extremely well, which should be asked in any war. War always entails high costs and the more disproportionate the sacrifice and benefit, the more disillusioned people will be. The ordinariness of the Prime Minister at Clarissa’s party is in contrast to how people responded to him and his office (again, delicately undermined by Woolf highlighting the public’s short attention span—from awe over an official’s car to being distracted by a skywriter). But there are several things that cause her theme not to connect with me. One is the conflation of the government with the country, letting symbols of “what they all stood for” override what the country actually stands for. The imperfections don’t necessarily negate everything achieved. The “triumphs of civilisation” (as Peter Walsh muses) don’t occur in perfect societies, nor do they occur everywhere. And while the benefits of those triumphs may not be shared equally, can they filter down so that everyone benefits to some extent? Characters like Hugh and Richard highlight the gratification comes from levels other then wealth or status. I guess my question is one of the baby and bathwater…OK, granted the (then) current situation isn’t ideal. What would you substitute it with? The second disconnection for me is a little unfair since I have the benefit of history since the book was published. Not trying to trivialize what Woolf highlights, but major events occurring after the book’s setting puts the inequities in a different perspective. Woolf even seems to acknowledge the improvements (although glacially) by drawing attention to changes in social mores and mobility that positively address some of the issues.

These complaints weren’t enough to take away my pleasure in reading the book but they did generate the niggling thoughts I tried to convey here. The exploration of relations and connections and their association with individuals’ search for the meaning of life and death is what made the book enjoyable for me.