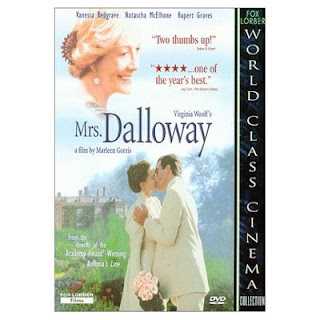 A woman throws a party, sees some old friends, and thinks of times gone by. The storyline by itself of Mrs. Dalloway makes for a challenging transition from book to screen. Factor in the novel's use of n internal dialogue to represent consciousness and I didn’t expect much from the movie. Fortunately the film was extremely well done and a true delight to watch. I usually have to watch a movie over several evenings, but I stayed up late in order to watch this in one sitting.

The screenplay is by Eileen Atkins and directed by Marleen Gorris and their teaming up proved to be a great combination. But the movie ultimately rests on Vanessa Redgrave as Clarissa Dalloway and she admirably fills the role. So much so that the younger Clarissa, played by Natascha McElhone who does a fine job, is overshadowed. The movie cuts back and forth in time just like the book, which may cause some confusion for those unfamiliar with it as well as slowing down the first part of the movie. The transitioning effect becomes more seamless as the movie rolls along, fortunately. I think that people who have read the book will enjoy hearing and seeing some of the sensory effects the movie adds, while those who haven’t read Woolf will have a bit more of a challenge but will take pleasure in it nonetheless.

As usual, I expect some changes from the book, which I have no problem with as long as the tone and meaning of the original is followed. A few of the changes I noted:

The changes are mostly minor (except for Clarissa seeing Septimus) and for the most part they add to the movie. The dancing during the party, for example, makes things much more lively and allows added touches like Richard and Elizabeth to pair up for a dance. Some of the sensory things that benefit include the chiming of the clocks, a constant foreboding from seeing spikes on the fences, being able to see all the flowers, and seeing Peter’s constant play with his knife (which was used to communicate some of his thoughts). The physical and behavioral change between the old and young Sally are highlighted so much easier in the movie. Some of the additional touches, like the insertion of war veterans around London (a man on crutches hobbling by or a blind beggar) add quite a bit to the theme regarding the toll of the Great War without resorting to hitting the viewer over the head.

Maybe even more than the demands of the older Clarissa, I thought the role of Septimus would be the hardest to pull off and Rupert Graves does about as well as could be expected. His face was able to express the torment that would suddenly descend on him. Without the constant look at his thoughts, however, the power of his madness is less personal. The role of Rezia was much less sympathetic than the book, which disappointed me somewhat. Probably the only other complaint I have is that Redgrave is so pale and washed out, at times her face looked like a death mask (which also makes her look much older than her supposed early 50s).

There were two extended voiceovers by Redgrave which, done at the beginning of the party and after hearing of Septimus’ death, felt like the right amount and at the perfect moments. Clarissa’s affirmation for living and her visual connection with the old woman across the way (not specifically mentioned in the book) was definitely the high point of the movie for me. Even the music was enjoyable. All in all, highly recommended whether or not you have read the book.
Posted by Dwight at 11:44 AM