To the lighthouse discussion: The Lighthouse 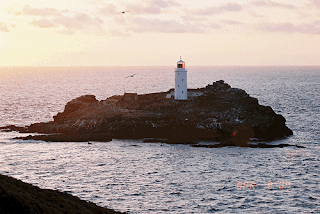 Godrevy Island lighthouse (Source)
"The great revelation had never come. The great revelation perhaps never did come. Instead there were little daily miracles, illuminations, matches struck unexpectedly in the dark; here was one. This, that, and the other; herself and Charles Tansley and the breaking wave; Mrs Ramsay bringing them together; Mrs Ramsay saying, "Life stand still here"; Mrs Ramsay making of the moment something permanent (as in another sphere Lily herself tried to make of the moment something permanent)--this was of the nature of a revelation. In the midst of chaos there was shape; this eternal passing and flowing (she looked at the clouds going and the leaves shaking) was struck into stability. Life stand still here, Mrs Ramsay said."
(The Lighthouse, Chapter 4)

The last section of To the Lighthouse reverts to narrating the consciousness of the characters. The family struggle is brought even more to the foreground—without Mrs. Ramsay, there is no more fighting for her attention. Instead the fighting is more direct between characters. The similarity between James and his father guarantees there will be friction. Cam’s love for her father holds up through all his cruelties and tyrannies. Along with Mrs. Ramsay’s abiding love despite everything, it paints a picture of strength that I’m sure can be misconstrued as weakness. Even Lily has to reconcile with the dead Mrs. Ramsay on this issue. The loss of the mother affected everyone including Lily. She is shown working through her grief, befuddlement and anger turning to anguish.

The characters that strike the reader as less likeable are given a sympathetic portrayal at some point. Just as the revelation in the first section of Charles Tansley’s poverty gives some understanding of his actions, Mr. Ramsay (despite his tyranny) is given a sympathetic touch at times in “The Lighthouse.” The sympathy that is shown between characters mostly comes from the females and is usually indirect. After the dinner Mrs. Ramsay gives her husband what he needs but not what he was (silently) asking for. Lily gives Charles Tansley help during the dinner. And in this section you see Lily unable to give Mr. Ramsay the sympathy he requested, instead bestowing him with pride regarding his boots.

A major focus in this section is the mutability of people and things, the self and how we view things. The distance from where things are viewed makes a difference—the waves looking tranquil from afar may be dangerous while in them. Cam looking back at the house while sailing thinks how peaceful it all looks, as compared to the hive-like activity while actually there. The same difference can be applied to time. How different everything looks when viewed years later. As James thought while looking at the lighthouse, “For nothing was simply one thing.” And this leads into the aspect of knowledge that Woolf addresses in the book. By showing the internal world of the characters, you see how little actually gets communicated to others. Others fill in the gaps of their knowledge as they see fit, as Lily does with Minta and Paul Raley. And this combination of experience and invention becomes a new “truth.” The desire for fifty pairs of eyes, and the recognition that even that isn’t enough, to understand someone shows the necessity of filling in the gaps.

The difficulty Lily has with her painting demonstrates the challenge in the artistic endeavor. “All that in idea seemed simple became in practice immediately complex,” thought Lily as she struggled with capturing her vision on the canvas. In the same way, she struggled with words to convey what she was thinking and became frustrated. She knows her work will only be hung in attics or stowed away somewhere, but that fact does not lessen the moment she is inspired to paint…the inspiration that makes life bigger and fuller than our limited consciousness can comprehend. The hypothetical beachcomber in “Time Passes” and Lily in this section continue to ask “What does it all mean?” The answer is given in those moments of transcendence, when we can escape ourselves and our limitations. Mrs. Ramsay attempted to do this by making time stand still, “making of the moment something permanent.” Lily attempts this with her painting, as does Mr. Ramsay with his work. Mrs. Ramsay realizes she can provide a stay against that “waterily” confusion and destructive elements that threatens family and friends. For a woman constantly described as placing “this with that,” she is able to provide order and stability for those around her and bridge the gap between various inwardly-focused lives.