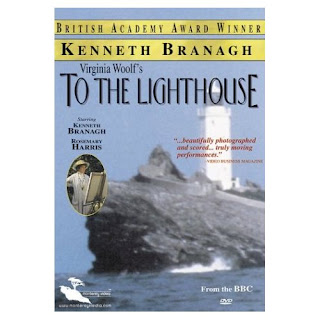 The IMDB page for the movie can be found here. An adaptation of Virginia Woolf’s work is going to be a challenge. How to capture the consciousness of the characters that fills the majority of the book?

Despite the massive changes to storyline, wholesale additions and omissions, and a pared down character list, the movie does a decent job at conveying the spirit of the novel. The setting is changed to Cornwall, where the Stephen family would vacation. Mr. Ramsay is given plenty of time to rage, bluster and tyrannize his family while still adding some of the sympathetic glances toward him. Rosemary Harris does a good job as Mrs. Ramsay, but I was not quite sold on the character as I was in the book. More time is given to Charles Tansley and a young Kenneth Branagh is admirable. The rest of the characters (two children, Minta Doyle and William Bankes are not included) fill out the solid cast.

The strains of family life definitely shine through, with the struggle for Mrs. Ramsay’s attention from the different family members shown very well. The competing view between Mrs. Ramsay and Lily Briscoe regarding the role of a woman in society is played up very well, with the addition of scenes and modern language to augment Woolf’s nascent feminism. There is little surprise that the strongest section of the movie was covering the ten years of the “Time Passes” section. Since this part was relayed from the outside, the views of the deteriorating house, rough weather, and family deaths were superficially covered well.

Several things suffered, unfortunately, and one omission was Mr. Ramsay’s apprehension about his legacy and questioning the enduring nature of art. In the movie he is concerned about the decline in the quality of his books and his inability to say anything new, but that is as far as it goes. But the biggest disappointment for me was that the dinner party never achieves the transcendent level as in the book. The characters switch to a voice-over during the party, which played much better than several stiff (and fortunately short) monologues meant to convey a character’s thoughts. Yet even then by the end of this scene I was somewhat tired of the technique, which gives me more appreciation of what the writers were up against in translating this to the screen. Even so, the sense of community and binding together against the watery destruction of time and nature was never developed.

One of the most difficult thoughts to put aside in watching a movie like this (besides going “that’s Aunt May Parker and Alfred the butler”) is “that’s not like the book.” There are many moments like that in this movie. Yet it is still an enjoyable film and I think a worthy adaption of the novel. Unfortunately it leaves me wanting something better, something that captures more of the questions and responses from Woolf’s book.
Posted by Dwight at 3:33 PM

Email ThisBlogThis!Share to TwitterShare to FacebookShare to Pinterest
Labels: Movies, To the Lighthouse, Virginia Woolf