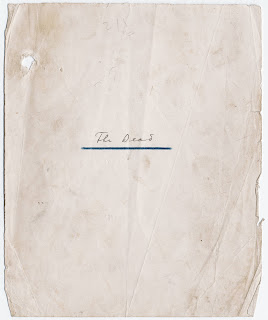 This was my first exposure to “The Dead” and I found it quite powerful and moving. So far in Dubliners there has been much bitterness and frustration with only glimpses of the humanity underneath. In "The Dead," the emphasis has been reversed. Since it would be easy to write a piece as long as the story itself, I’ll limit myself to just a few points.

Gabriel Conroy, upon first inspection, seems a likeable enough man. He obviously loves his wife (books a hotel room for the night in order to avoid the previous year’s issues on the drive home, feels warmth and desire toward her), respects his aunts (attends every party, listens to every excruciating performance), shoulders his duties (frets over his speech, carves the goose)…in short he is a nice guy. A bit stuffy perhaps, as his condescension towards the other guests probable inability to “get” Robert Browning, but still likeable. Yet something feels lie it is missing. At first it might appear his response to Miss Ivors of "I'm sick of my own country, sick of it!" holds the key, but that is only part of it. As with the misunderstandings and miscommunications of the entire evening, there is something else going on.

While he hasn’t really discovered or examined his own country, it soon becomes apparent that he hasn’t even examined himself or his wife. Miss Ivors introduces the West (authentic) vs. East (dead-end cities) tension, which Gabriel escapes by leaving Ireland whenever he can. Up to this point in Dubliners you feel this is exactly Joyce’s feeling, that those wishing to tie themselves to Ireland can not succeed. Yet Gabriel comes to realize that he can not completely escape, that the past and location shapes and molds the person. There is interdependency between the living and the dead that Joyce has dramatized often within Dubliners, from the opening pages in “Two Sisters” to the last sentence in “The Dead.” What Gabriel lacks is true consciousness, and when he sees what his wife has experienced with Michael he is transformed. In a slow awakening, he sees his own failings and shortsightedness, connecting to her and thus to himself.

The transformation process within Gabriel is amazing to watch. At first he appears as a cuckolded husband, realizing his wife loved Michael in a way she hasn’t loved him. But it’s not that she doesn’t love Gabriel. How can he compete with someone that died because of love for her? Gabriel takes the first step by understanding her pain that she has hidden for all these years, empathizing with her and overcoming his jealousy. He carries that over to himself as he sees himself as he truly is, losing his identity and aloneness to join the greater world. He realizes he must “set out on his journey westward,” understanding the past and the dead in order to fully comprehend and appreciate the living. The imagery in the last paragraph, with the constant repetition of the word “falling,” highlights the love filling him as “his soul swooned”. A beautiful ending to an incredibly moving passage.

“The Dead” is so much better than the stories that preceded it in Dubliners, yet it doesn’t feel tacked on or out of place. It’s as if the previous stories set it up, letting the reader really understand what is going on with many of the characters without having to explain anything. You grasp what Lily means in her frustrations having seen several domestics already. Freddy needs no explanation as drunkards litter the preceding pages. What is different is the quality of the writing. I had to laugh at the following passage:

”Gabriel could not listen while Mary Jane was playing her Academy piece, full of runs and difficult passages, to the hushed drawing-room. He liked music but the piece she was playing had no melody for him and he doubted whether it had any melody for the other listeners, though they had begged Mary Jane to play something.”

That described how I felt about the previous stories which were hit or miss, the frills sometimes outshining the ‘melody’. “The Dead” pulls many of the themes together, coalescing them into something greater than the sum of their parts. The interrelationship between living and dead and seeing someone else as well as yourself for the first time is a powerful experience. Despite the handicaps Joyce lays out within Dubliners (politics, religion, poverty and drink among others), it is nice to see a ray of hope at the end of what can be a depressing read at times. That Gabriel moves from the living dead to being truly alive ends the book with guarded optimism.

Title page image is from Yale University’s Beinecke Rare Book and Manuscript Library online. You can find all stories from Dubliners as well as other James Joyce treasures by going here and doing a search on 'Joyce'.
Posted by Dwight at 11:57 AM