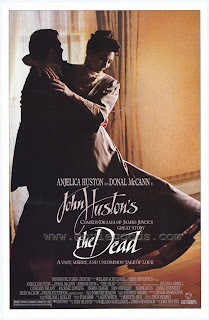 One of the best adaptations from page to screen I’ve seen. You definitely have to be in the mood for a period piece, but the acting is superb. There are a few minor changes from the story, mostly in the way of additions, but the movie stays true.

In moving the story to the screen, there will be points that suffer in the translation. The ending, where the last few paragraphs are done as a voice-over by Gabriel (Donal McCann), is probably the only possible way to communicate his thoughts. Yet it doesn’t feel as powerful as the story where the viewpoint was constantly moving from first-person to third-person. While the scene was not bad (and follows the well-done tearful telling of Michael Furey’s demise), it suffers in comparison.

Fortunately there are scenes that improve on the screen. Seeing Aunt Julia’s “greyness” throughout, even when not part of the main scene, drives home her fragility and age. Instead of Joyce’s “clear and strong in tone” when singing “Arrayed for the Bridal,” we hear a noticeably feeble voice. Combined with the camera panning through the apartment, showing acquisitions and memories through the years, it is a potent reminder of the weakening of age and impending death.

The scene with Gretta on the stairs, listening to Bartell D'Arcy sing, lingers much longer than the book. Being able to see Gretta go through the range of emotions during and after the song is visually powerful. Anjelica Huston, who I’ve never seen so beautiful as here, is cast in front of a stained-glass window on the stairs, reminiscent of a Madonna portrait.

All in all, well done and I highly recommend it. What the movie loses in the conversion to screen (which fortunately isn’t much), it offsets by taking advantage of visual and vocal aspects available to the medium. A very minor point, but one that serves as an example of this addition is the movie poster itself. While dancing or in an embrace, Gretta is partially in the light while Gabriel is completely in the shadows—it could be Gabriel or Michael she is dancing with, and it could emphasize how we will all be shades. A nice touch that highlights the additional dimensions which can be realized through the different medium.

Movie poster from moviegoods.com
Posted by Dwight at 9:52 AM