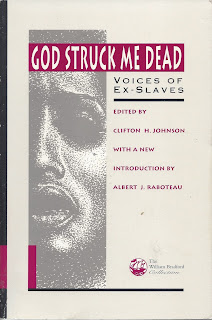 The reissue of a rare volume of ex-slave narratives is as timely now as it was when it first appeared in a mass-produced paperback edition in 1969. These autobiographical memories and recollections of conversion experiences of elderly African Americans, born under slavery, were culled from interviews conducted during the years 1927 to 1929 by Andrew Polk Watson, a graduate student in anthropology at Fisk University. Originally issued in limited circulation at Social Science Source Documents No. 2 by Fisk in 1945 in tandem with another volume of ex-slave narratives, The Unwritten History of Slavery (Social Science Source Documents No. 1), the value of these texts becomes all the more apparent when we realize that they were recorded just as the opportunity to listen to the testimony of living former slaves was rapidly disappearing. Under the guidance of anthropologist Paul Radin, then serving as a research professor at Fisk, Watson conducted extended interviews with a hundred elderly black people, asking them to recall life during slavery and to describe their religious conversion experiences. "The autobiographical narratives were then culled from long and rambling accounts, but in most cases the conversion experiences were repeated several times as here recorded, with little or no variation from one telling to the next."
- Albert J. Rabateau (xix)

The central focus in this book is the religious conversion experience, the sudden, dramatic change in an individual when realizing acceptance into the Christian faith. The book contains an introductory essay by Andrew P. Watson on "Negro Primitive Religious Services," thirty-one conversion stories, and six autobiographical sketches. In this edition's Introduction by Rabateau, he notes

the vividness of the imagery and its similarity from one account to the next. A common store of biblical sources, especially the Book of Revelations, helps to explain the frequency with which the same images appear. These were common cultural images, heard over and over again in hymns, prayers, and expounded upon in sermon after sermon. The accounts also betray a common narrative pattern due to the regular recitation of conversion experiences at revivals and "experience meetings" by the converted who were expected to talk about the inner working of the Spirit upon their hearts. Individual and unique as these conversion experiences were, they shared the common narrative construction and group norms associated with the tradition. Thus conversion was both a profoundly personal experience and an experience defined and validated within a community of church folk.
(xxiii)

Despite having many stories echo each other, the former slaves' conversion stories are interesting to read, in part because of the details of their differences but mainly from the joy you can tell the interviewee has in telling it. Common themes include individual and group visits to the woods or a particular tree, hearing voices or seeing a "little man," and sickness or loss of appetite, all leading up to a "death" experiences from which God brings them back to life reborn in faith. Their descriptions of God (and the easterly direction where he resides) sound similar, as does the joy expressed through singing and dancing, all hinting at some sort of cultural synchronicity. Without a doubt, though, the bliss expressed by the slaves feels authentic. Here's a conversion story from the "To Hell with a Prayer in My Mouth" chapter that covers a few of the common attributes:

[The] Lord would begin to work with me, saying each time, "You got to die and can't live!" I hadn't yet learnt anything about a spiritual death, so I thought he meant I would have to die a natural death. My husband and neighbors thought I had lost my mind, so they sent for my mother. She came and told me to pray. At that ver minute I was praying on the inside, "Lord, lave mercy on me. Lord, have mercy on me." After she came I picked out a way a little way from the house, in a thicket, and then I went daily to pray. But it seemed like the more I prayed, the worse I got. I felt like I had the burden of the world on my shoulders.

Finally one night I went out to a spot much farther from the house and fell on my knees. A voice spoke and said, "Lo, here is the way." I heard a noise like a rising storm, but I stayed there, and when the voice spoke I stretched out flat on the ground. God spoke to me and again said, "My little one, you got to die and can't live." I jumped up and went to the house and found my husband and children asleep. I got in bed, my heart still praying, "Lord have mercy on my soul." The voice spoke again, "You got to die and can't live." I began to die right there and was dying all night. My husband called in five doctors to me, and they gave me up and said that I would not live until twelve o'clock the next day.

About nine or ten the next day I began to see the wondrous works of God. I saw myself on the very brink of hell. I was on a little something that was swinging back and forth, and it looked as if I must surely fall at any minute. My jaws were locked and my tongue clove to the roof of my mouth, but on the inside I was still praying, "Lord have mercy! Lord, have mercy on my soul! If it be your will to send me to hell, send me with a prayer in my mouth." When I said this I took hope, for the Lord spoke to me and said, "I am the way, the truth, and the life. I am the very door to the Father. Follow me! Follow me!" (93-4)

This interviewee then tells of the wondrous things she sees, and also additional dreams/visions she has had. There are several preachers interviewed, too, and they share similar stories about how they rarely realize what they are saying during their sermon, the part that Watson calls "the coming of the spirit" in his essay. As I mentioned earlier, the repetitive nature can wear on the reader, but the differences, particularly their lives and circumstances, provide insight into the types of hardships slaves and former slaves had to deal with.

The most engaging sections of the book for me were the autobiographical chapters. Some of these are very short and don't supply more than sketches of what it was like to be a slave, but the few that are longer provide a more detailed picture on the lives of those former slaves. We see varied treatments of the slaves, from good and bad masters, and even from Union troops. There are dealings with paddy rollers, armed white patrollers making sure slaves don't escape. It's chilling to hear the former slaves recall being bought and sold, separated from family, and the decisions they had to make if they wanted to escape. These details help give the context needed to understand the joy they received from religion, one of the few areas where they had control, as well as giving them validation and acceptance. Despite some of the harrowing details, it's ultimately a book of joy and peace.

The final chapter, though, yields quite a different tone. The interviewee (apparently younger than others) says "they have not had all the varied experiences [regarding conversion] that most of the older people say they have had. ... I have seen nothing and heard nothing, but only feel the spirit in my soul, and I believe that will save me when I come to die." This is the one outlier in the interviews, and being younger than the others I have to wonder if that wasn't meant to signal a turning away from the evangelical tradition of conversion for later generations.

Because I liked the autobiographical chapters the most, I was interested in the mentioned The Unwritten History of Slavery, which I gather is sort of a "companion" to this book with oral histories of ex-slaves. While it was difficult to find at an affordable price (for me), I have placed an InterLibrary Loan on it and hope to post on it soon.