Excerpt from The Glance of the Medusa by László F. Földényi

Földényi's The Glance of the Medusa: The Physiognomy of Mysticism is a book I have on my Christmas list, so I hope to read more of it soon. Hungarian Literature Online has an excerpt from the book's second chapter:

For this reason, the moment of love is not only about finding oneself but also about dispossession. While those in love are able to compress into someone else all the desire and longing that they have previously considered to be their own, and could not handle to a satisfactory extent, they also find that they ended up beyond themselves. They found their centre, yet this happens to be located outside the boundary of their selves. This does not mean that the existing centre has suddenly ‘shifted’ into another being, but, rather, that this centre has just come into being—sameness is the outcome of difference. In parallel with the ‘lightning glance’ and the ‘silver flash’, it becomes increasingly likely that the individual should lose itself at the very point when it supposedly found itself, because existence itself lacks a centre. Its alleged ‘basis’ is being, which permeates everything yet remains on the outside, so it becomes noticeable only in the lack inherent in things. Whenever one tries to ‘pull oneself together’, one cannot help finding oneself set into motion by a faith placed in some sort of a supposed centre. Beyond a certain point, however, it becomes obvious that this is impossible. The more existence ‘thickens’, the less one can find one’s way around, and ultimately all one is in a position to perceive is the fact of being at the mercy of the impossible.

In an earlier post, HLO included this from the bookflap:

In The Glance of the Medusa, Lászó F. Földényi offers a mesmerizing examination of the rich history of European culture through the lens of mythology and philosophy. Embracing the best traditions of essay writing, this volume invites readers on a spiritual and intellectual adventure. The seven essays bear testimony to Földényi’s encyclopedic knowledge and ask whether it is possible to overcome our fear of passing away. In doing so, they illuminate moments of mystical experience viewed in a historical perspective while inviting readers to engage with such moments in the present by immersing themselves into the process of reading and thinking. 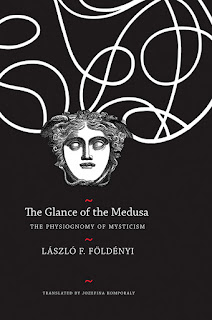