Women of the Gulag film

Several years ago I posted on Women of the Gulag: Portraits of Five Remarkable Lives by Paul R. Gregory. A moving and powerful book, Gregory detailed some of the problems that five Soviet women faced when victimized by the gulag system. I believe I first found out about the book from Cynthia Haven at The Book Haven, and over the years she has posted about a film based on the book being made and the awards it was nominated for. The film was directed by Marianna Yarovskaya and produced by Yarovskaya and Gregory. Over the years I've added some of Cynthia's updates to my original post, but I'll list some of them here, too. Cynthia has also posted about a screening that the film had at Stanford and a podcast on the Q&A session afterwords. Her post includes more on the film:

The film tells the compelling stories of six remarkable women – among the last survivors of the Gulag, the brutal system of repression that devastated the Soviet population during the Stalin years. Most stories of the gulag have told of men’s experience. Women of the Gulag is the first account of women in the camps and special settlements.

Check out the links from Cynthia's post and from my post on the book. I'm looking forward to when I'll be able to see the movie. Also play the podcast she includes from the Q&A session. Yarovskaya mentions that most of the ladies from the film had died or were too infirm to attend the screening the movie had in Moscow, but that one woman was able to attend. Yarovskaya and Gregory talk about how the gulags are viewed in Russia today (if someone knows about them at all) and how the screenings and support from the government gradually occurred. (Note: it may have been my system, but the podcast froze occasionally. In case others run into that problem, I could get it to resume playing by skipping ahead 10-15 seconds.)

If you're not tired of links yet, here are two more to visit:
The film's website, which has a clip from the movie and goes into more detail of its making
An interview with the director 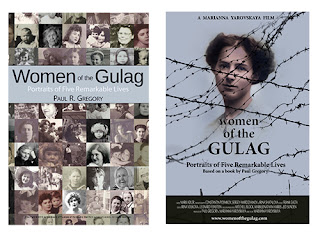 Picture source
Posted by Dwight at 8:04 AM

There is a movie?? Oh wow, that is SO cool. Now I feel even guiltier for not reading the book yet. I hope I can see this!