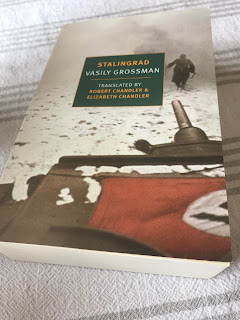 Judging by how limited my time was yesterday and only making my way through Robert Chandler's introduction to Stalingrad, this may be a true "summer(-long) read" for me. And I'm fine with that.

A few quick notes on that introduction...
Chandler provides a good, concise introduction to Stalingrad and the trouble Grossman had with its publication. Because of the relationship between this book and Life and Fate, there is a lot on the second book, too. I liked this view of the two novels:

It [Life and Fate] is, amongst other things, a considered statement of his moral and political philosophy—a meditation on the nature of totalitarianism, the danger presented by even the most seemingly benign of ideologies, and the moral responsibility of each individual for his own actions. … Stalingrad, in contrast, is less philosophical, but more immediate; it presents us with a richer, more varied human story. (viii)

From what I understand from Alexandra Popoff's book Vasily Grossman and the Soviet Century, Chandler sums up one of Grossman's purposes perfectly when he says, “Stalingrad is, amongst much else, an act of homage. One of Grossman’s aims was to honour the dead—especially those who had been forgotten.” (xvii)

There are many historical figures in Stalingrad and Chandler looks at a couple of them. One of the central figures of the novel is Viktor Shtrum, based on Lev Yakovlevich Shtrum, “one of the founders of Soviet nuclear physics.” The historical Shtrum was executed in 1936 during one of many purges and the connection between the real-life person and the novel's character may have been lost to many people. Chandler points to an article by Tatian Dettmer establishing the relationship between the two. “The Physicist Lev Shtrum. Unknown Hero of a Famous Novel” is in Russian, but worth reading with a "Translate" option. The article covers the tragic life and fate of the physicist. I'll excerpt some of the article here. Note that the historical name shows up as "Strum" in translation.

More than half a century after the creation of the novel, a prototype of one of his main characters, the physicist Viktor Strum, was found. He was a Soviet nuclear physicist Lev Yakovlevich Strum (1890–1936), head of the department of theoretical physics at Kiev University.

The image of the physicist Victor Strum has a special place in the work of Grossman. The writer endowed Shtrum with his features and put his own thoughts on social and political themes into his mouth. Strum’s life story reproduces key points in the author’s biography: for example, the tragic story of a mother shot by the Germans in occupied Berdichev, or a slanderous letter that the Strum physicist signs at the time of spiritual confusion. A similar letter was once signed by Grossman himself, which he later bitterly regretted.

Another important feature of the hero of Grossman is the tendency to philosophical understanding of the surrounding reality, be it the peculiarities of the Soviet regime or the laws of physics, with the help of which Viktor Strum tries to explain the laws of social life. A versatile, enthusiastic, inquisitive person, Lev Strum was widely known in Kiev and beyond as a public lecturer and popularizer of science.

In an update to the article, Dettmer notes that Alexandra Popoff had found a couple of references to Lev Shtrum in Grossman’s letters to his father. Dettmer notes in the body of the article: “It is hoped that the answer to this question will be found: not all archival materials have been investigated both in Kiev and in Moscow.” There is more on the connection between the character and person at "Vasily Grossman and the Plight of Soviet Jewish Scientists: The Tragic Tale of the Physicist Lev Shtrum", a LitHub article credited to both Dettmer and Popoff.

Chandler is correct to note that Grossman took a risk by making the central character an “enemy of the people,” but Alexandra Popoff rounds out this observation by adding, “The fictional Shtrum is invested with Grossman’s personality: he is the author’s alter ego.” (page 202, Vassily Grossman and the Soviet Century). The importance of Viktor Shtrum to Grossman in the novel can be seen from Grossman's stubborn refusal to remove the character from Stalingrad despite repeated calls to delete the chapters in which he appeared.

Not only is the release of Stalingrad in English a cause for celebration, Chandler adds that there was a release in 2013 of the typescripts of Life and Fate that were confiscated by the KGB in 1961 and he hopes to revisit his translation in light of this new source material.

It's going to be a great summer...

Update:
Aargh, I hate it when I hit Publish before including everything I meant to. I also wanted to note that the book contains a timeline of the war (from the beginning of World War II to the surrender of German troops in Stalingrad), maps, an Afterword that goes into detail on the difficulty of piecing the text of the novel together, a helpful (and long) list of characters, and some books for further reading.

I don't know if this will be helpful for Stalingrad, but the BBC's "tree" of characters for Life and Fate might come in handy.

Also, HistoryofWar.org has a nice collection of Maps and Pictures for the Battle of Stalingrad.

More links can be found at the archived page of BBC4 Radio's page for Life and Fate. Clicking on the previously aired episodes comes up with "This episode will be available soon." Here's hoping that's correct.

Thank you very much, Dwight! All the best, Roobert Chandler

My pleasure. I'm looking forward to diving into it!

Thank you for the link to the Tree of Life and Fate (that's kind of a good title all on its own!) I will put with my as yet unread copy of L and F, which of course has advanced one step down the list after the release of Stalingrad! Next up to wish for from NYRB, The Strudlhof Steps by von Doderer, which I believe is currently being translated by Vincent Kling. I have a weakness for Interwar!

I've already found out the family tree is helpful for Stalingrad.

Thanks for the heads up on Doderer. Looks like you can download part one of The Strudhof Steps already and parts of some of his other works at http://www.doderer-gesellschaft.org/english/downloads.html