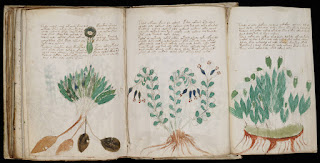 Picture source from Old Maps, Expeditions, and Explorations blog
(See the link for more background on the manuscript from Gordon Rugg)

The Voynich manuscript has been in the news off and on over the past few years. From Wikipedia:


The Voynich manuscript is an illustrated codex hand-written in an unknown writing system. The vellum on which it is written has been carbon-dated to the early 15th century (1404–1438), and it may have been composed in Northern Italy during the Italian Renaissance. The manuscript is named after Wilfrid Voynich, a Polish-Samogitian book dealer who purchased it in 1912.

Yale University Press released a beautiful facsimile edition in 2016. If you get a chance to look through the book, please do. It's a thing of beauty, and the accompanying essays go into detail about what was known about the manuscript at the time.

There have been recent claims on deciphering the manuscript, one here declaring it a guide to woman's health, but most claims have been debunked or withdrawn. Now comes the article The Language and Writing System of MS408 (Voynich) Explained, providing a detailed explanation of the language and writing system used in the manuscript and details of the story. From the article:


It was written by an entirely unknown and ordinary figure from the past, and without any deliberate code but a language and writing system that were in normal and everyday use for their time and place, yet the linguistic and historic information it holds are of unparalleled importance. So it turns out that the manuscript is remarkable after all, but in academic ways rather than sensationalistic and fantastical ways.

Translations reveal that the manuscript is a compendium of information on herbal remedies, therapeutic bathing and astrological readings concerning matters of the female mind, of the body, of reproduction, of parenting and of the heart in accordance with the Catholic and Roman pagan religious beliefs of Mediterranean Europeans during the late Medieval period (Cheshire, G. 2017. “Linguistic Missing Links.", Cheshire, G. 2017b. “Linguistically Dating and Locating Manuscript MS408.”). More specifically, the manuscript was compiled by a Dominican nun as a source of reference for the female royal court to which her monastery was affiliated.

Within the manuscript there is a foldout pictorial map that provides the necessary information to date and locate the origin of the manuscript. It tells the adventurous, and rather inspiring, story of a rescue mission, by ship, to save the victims of a volcanic eruption in the Tyrrhenian Sea that began on the evening of the 4 February 1444 (Wilson, J. 1810. A History of Mountains: Geographical and Mineralogical. Vol. III. London: Riddell of London.; Ward, P. 1974. The Aeolian Islands. Cambridge: Oleander Press.).

The manuscript originates from Castello Aragonese, an island castle and citadel off Ischia, and was compiled for Maria of Castile, Queen of Aragon, (1401–58) who led the rescue mission as regent during the absence of her husband, King Alfonso V of Aragon (1396–1458) who was otherwise occupied, having only recently conquered and then taken control of Naples in February 1443. Incidentally, Maria was great-aunt to Catherine of Aragon (1485–1536), first wife of King Henry VIII (1491–1547) and mother of Queen Mary Tudor (1516–58).

The island of Ischia is historically famous for its hot volcanic spas, which exist to this day. The manuscript has many images of naked women bathing in them, both recreationally and therapeutically. There are also images of Queen Maria and her court conducting trade negotiations whilst bathing. Clearly the spa lifestyle was highly regarded as a form of physical cleansing and spiritual communion, as well as a general means of relaxation and leisure.

The last part of the article discusses a memoir "written by Loise De Rosa (1385–1475), who lived and worked in the court of Naples. It is titled De Regno di Napoli (The Kingdom of Naples)," written in a similar style and using similar letterforms, and helps explain why the Voynich manuscript "is so dominated by female issues, activities and adventures and why so few images of men appear." As with quite a bit of literature, sexual frustration comes into play.

Even if the Voynich manuscript doesn't fascinate you, I highly recommend the article for the "detective" aspect of deciphering a text that has baffled experts for years.

Update (2019 May 16): OK, maybe not. See this article at Ars Technica for some skeptical responses (to put it nicely) to Cheshire's claim.

fascinating... there's been a number of "final solutions" concerning the interpretation of the VM... time will tell if this one is the pure quill...

I kind of like that this may be a book on a medieval "road trip."

Even though I'm not sure I follow all of the discussions on the language and writing style, this has the most detail that seems plausible and fitting with other details of the time. But as you say, we shall see...

I've seen that book - it's glorious - as is this latest take on the history/origins. I'm taking the article with me for my commute this morning, thanks.

That must be some commute if you make it through this article. Enjoy!