Last week I decided to take the long way back to Atlanta for my plane ride home. It turned out to be a meditative trip. Driving across the Florida panhandle, from the Alabama border to Tallahassee, allowed me to see some of the devastation from Hurricane Michael, which had hit the area a few weeks earlier. Entire groves of trees broken and twisted off at 15-20 feet above the ground, large signs strewn about like children's toys, hundred-year-old trees uprooted...demolition and spoliation I've seen before thanks to all the hurricanes and tornadoes while I was growing up in the south. Even so, each time is a reminder of the power of nature and a cause for marvel. Combine that with arriving home and having friends dealing with fires in northern and southern California and provides a check on thinking that Nature is always your friend.

The stop I wanted to highlight was my visit at the Andersonville National Historical Sight, near Andersonville, Georgia. Formerly known as Camp Sumter, a Confederate prisoner-of-war camp during the American Civil War, it operated for just over a year near the end of the war (1864-65). Approximately 45,000 Union soldiers were housed there during that period, with over 13,000 dying. The grounds have been left mostly undeveloped, with several memorials and recreations of one of the gates and corners of the compound, which I found...well, "refreshing" isn't quite the right word. But it did allow you to picture what this area would have looked like just over 150 years ago. National Park Services maps of the camp, cemetery, and surrounding area can be found here. From the park website:

Andersonville National Historic Site began as a stockade built about 18 months before the end of the U.S. Civil War to hold Union Army prisoners captured by Confederate soldiers. Located deep behind Confederate lines, the 26.5-acre Camp Sumter (named for the south Georgia county it occupied) was designed for a maximum of 10,000 prisoners. At its most crowded, it held more than 32,000 men, many of them wounded and starving, in horrific conditions with rampant disease, contaminated water, and only minimal shelter from the blazing sun and the chilling winter rain. In the prison's 14 months of existence, some 45,000 Union prisoners arrived here;of those, 12,920 died and were buried in a cemetery created just outside the prison walls.


In addition to the military prison area and the cemetery is the National Prisoner of War Museum memorial, another extremely moving exhibit. My visit there was too quick to give more than just an impression, but on my cursory walk-through I felt it well done and something necessary about an angle of war too often ignored. I'm sure it's difficult to please everyone with such an all-encompassing museum, but as I said I thought it well done. Hopefully it proves enlightening to those not growing up and hearing often about American POWs on the nightly news.

I wanted to highlight the sight since its location might be just enough out of the way of travelers). It's obviously not an uplifting place to visit, but one I think is important, which is why I'm publishing this post. I didn't take too many pictures, thinking I would rely on pictures posted online, but I didn't find that many I wanted to share. Here's one I took of the Providence Spring memorial, a shelter erected by Union veteran groups to commemorate a spring erupting from the ground, a godsend for parched prisoners. More on the spring and memorial with some additional pictures can be found here. 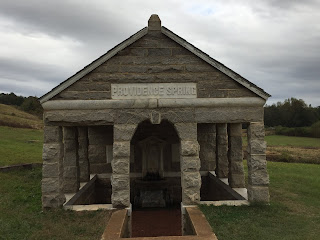 Right above the spring is a reconstruction of the North Gate (or rather one of the two North Gates), the entrance through which most of the prisoners would have passed through. I chose this picture to highlight the slope down to the creek that flowed through the camp. From the top of the hills on either side of the creek you have an encompassing view of the area. 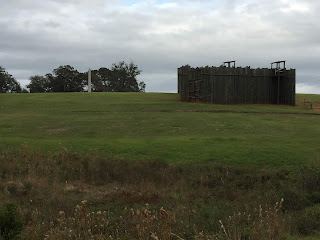 The waist-high information sign on the right side gives you an idea of the scale of these imposing timbers. In the background to the left is the Ohio monument, one of several in the memorial area to the northwest of the prison site.

I loved the backroads I drove getting to the park and then heading to Atlanta. I know some of that was nostalgia, since I have lived in areas like these throughout the south. The overcast weather seemed to amplify the somberness I felt while there.

There are plenty of histories and webpages on Andersonville that are easily accessible, so I'll only link this one at History.com..
Posted by Dwight at 10:52 AM

i read a book re Andersonville once; very grim and awful... driving like that through the backroads of Oregon is rewarding also, if you ever get a chance...

I've done some of the backroads of Oregon, but not nearly as much as I'd like to. It's definitely on my "want to" list.

I have passed around the park brochure (which can be downloaded from one of the links in the post) and while most everyone I haded it to has heard of Andersonville, few realized the numbers it dealt with. Grim and awful, indeed.

Kantor's Andersonville won the Pultizer Prize for fiction in 1956. Although 1956 was my birth year, I have never read it in a Birth Year Challenge. Far too grim for me I fear!

I've not read "Andersonville" either, but have heard good things about it. I remember reading somewhere that Cormac McCarthy felt it was an influence on his writing. (I'm sure some people will view that as a good thing while others would disagree.)