The Disappearance of Émile Zola: Love, Literature, and the Dreyfus Case by Michael Rosen 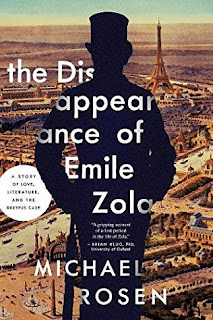 The Disappearance of Émile Zola: Love, Literature, and the Dreyfus Case by Michael Rosen
Pegasus Books, 2017


I have to admit I've never really connected with Zola's books. I find things I appreciate and like in his writing, but its more in fits and starts than for a sustained reading. What interested me in this book was Jean Barois by Roger Martin du Gard, which included a cameo by Zola during one of the trials in the Dreyfus affair, and my interest in following up on what happened after Zola's libel trial.

A little background if you aren't familiar with Zola's famous 'J'Accuse' letter printed in the Parisian daily L’Aurore on January 13, 1898:
French Captain Alfred Dreyfus had been accused of passing French military secrets to the German embassy. Based on documents believed to be forged, Dreyfus was convicted of treason. The case received heightened public scrutiny as Zola and others were convinced the French army was trying to cover for the real guilty party(s) and also because of antisemitism (Drefus was Jewish). Zola's letter was addressed to the French president, laying out his beliefs that deceit, forgery, incompetence, antisemitism, villainy, and "the defeat of justice and plain truth" in the case resulted in a guilty verdict. Zola highlights that his letter exposed himself to a libel charge, hoping that such a trial would allow new evidence in the Dreyfus case to exonerate not just himself but Dreyfus, too. During Zola's trial, Dreyfus' case was not reviewed and the author was found guilty of libel. About to be fined and sentenced to a year in prison, Zola fled to England.

Rosen's book follows the author's flight across the channel and his time in England (February 1898 to summer 1899), when he was able to return to France after Dreyfus' verdict was overturned and Zola's follow-up trial was postponed. It's a lively story at first, as Zola arrives in London without any luggage not able to speak English, having to pantomime any request. Just four years earlier he had been the focus of adulatory receptions in London's literary circles, but now he was a fugitive intent on hiding his identity. Eventually he settles in a Norwood hotel suite for most of his stay in England.

Making matters even more complicated was Zola's thorny personal life. His wife Alexandrine and his mistress Jeanne Rozerot (and her two children with Zola) came to visit the author in England at different times, reflecting a similar arrangement the trio had arrived at in France so Zola could share time with both women. While in England, Zola maintained his writing habits and was able to begin a new series of novels (Les Quatre Évangile), as well as other short works.

Rosen reconstructs what happened through Zola's fastidious letter writing to Alexandrine and Jeanne, the memoirs of his daughter Denise, and a book written by Zola's English translator and publisher Ernest Vizetelly. The account can become monotonous at times, resulting from Zola's tendency for a structured, repetitive routine.  Other times, though, his fugitive life provides something out of a spy thriller (although not nearly at the same level). His flight to England generated many newspaper articles in Paris as the press published articles claiming he was in Switzerland or Norway before finally confirming he was only across the channel. His political maneuvering earned him reticent friends in socialist circles, but they were instrumental in Dreyfus' eventual pardon Dreyfus. Rosen sums up the contradictions Zola had to deal with upon his return to France, in that

throughout the period of the Dreyfus case, his exile and the last months of his life was that the France he wanted (republican, humanist, secular, democratic and evolving toward socialism) was not the France he had written about in 'J'Accuse', faced in his own trials, or fulminated against in his most miserable moments in exile. So when, in his literary mind, he placed France at the head of a movement to humanise the world, this was a France that he knew didn't exist yet. What's more, by identifying imperialism as an evil that other powers were guilty of, he had either to efface the imperialism of France itself or claim that whatever France did, could do or should do outside of its own borders was as a humane, civilising force. (page 231, hardcover)

The upper echelons of the French military never forgave Zola for his role in publishing their conspiracies regarding the Dreyfus case. Zola's stay in England proved to be a great strain, something he never seemed to fully recover from. The antisemitism he fought against ended up making him a target of the same hatred and prejudice. Three years after returning to France, Zola and his wife died from carbon monoxide poisoning related to a stuck chimney flue, with rumors of murder never confirmed.

Rosen has produced a mostly lively account, where the severe turbulence of this period of Zola's life clashes with his desire for spending time with his family. *ahem* Families. At times the recounting of the author's routine and his concerns became repetitive (because Zola repeated them often) , but overall it's an solid documentation of the author's place and standing in the Dreyfus case while examining Zola's life in general and this period in particular.

Also included in the book is a postscript that highlights the BBC Radio 3 program "Zola in Norwood", covering parts of this story in an interview with Madame Martine Le Blond-Zola, Émile's great-granddaughter. Also included is "Angeline," a short story by Zola, inspired in part by some of the English countryside the author visited.
Posted by Dwight at 3:26 PM

i'm not a great Zola fan, either: his work seems intended to shock, politically socially, or economically, rather than to elucidate or analyze... but i like your post; it's seemingly like a readable book...

Extremely readable. I will say it appears Zola would research what he was writing about in order to make it as "real" as possible.Thanks!