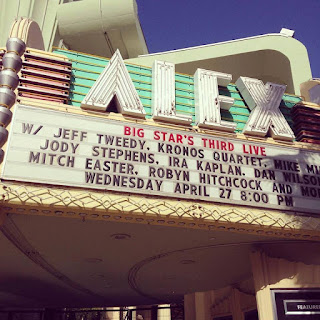 Picture source: Big Star Third Live Facebook page
I have wanted to post something...anything...but haven't felt up to it for a while. I've posted about this tour elsewhere, but I'm pleasantly surprised how much I liked the documentary release covering one of its performances. There are some interviews with a few of the performers, but thankfully it avoids a hagiographical treatment (well, as much as you can with a tribute) of the group and focuses of the music. Plus, it's gratifying to see Jody Stephens included in the project.

I'll have to apologize...I'm not up for a history of the band, recordings, etc., but I will say I was a little surprised that the focus for the tour was Third. Fortunately, that focus works well in the film (and I'm sure live, too). Big Star was a group with multiple daemons, and Third captures many of them quite well. It was a recording out of time, out of mind, and out of any type of definition. I believe it was Robert Christgau that asked, about Radio City, if a group could be so twisted and catchy at the same time. The answer, fortunately, is available for everyone to judge, and much easier to access than when I was collecting vinyl records.

The first half of the movie shows performances of Big Star songs from #1 Record and Radio City (and an inclusion of the solo Chris Bell song "I Am the Cosmos"). Most of the songs on Third fill the second half, although without the covers from the various versions (I believe...I'm not committing to anything while I'm still trying out different pain meds). The songs are too self-conscious. They are too eccentric. They are too depressing. And yet I still find them uplifting, in some strange way. OK...not for everyone, but I still highly recommend it. 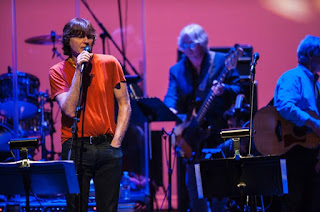 Jody Stephens, drummer for Big Star (same picture source as above)
Posted by Dwight at 4:09 PM