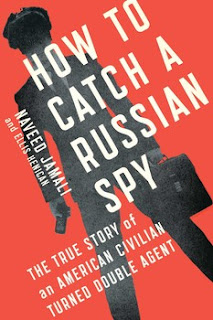 How to Catch a Russian Spy: The True Story of an American Civilian Turned Double Agent
by Naveed Jamali and Ellis Henican
Scribner, 2015
Hardcover, 304 pages

I'm not sure where I heard about this book or what caused me to place a hold on it at the library, but it followed me home one day and I finally opened it the other evening. I'm glad I did—it was exactly what I needed at the moment: funny, engaging, and something I could fly through.

For three nerve-wracking years, Naveed Jamali spied on America for the Russians, trading thumb drives of sensitive technical data for envelopes of cash, selling out his own beloved country across noisy restaurant tables and in quiet parking lots. Or so the Russians believed. In fact, this young American civilian was a covert double agent working with the FBI. The Cold War wasn’t really over. It had just gone high-tech. How to Catch a Russian Spy is the one-of-a-kind story of how one young man’s post-college adventure became a real-life US counter-intelligence coup.
(From the publisher's page)

Naveed Jamali describes himself as a master of underachievement in his early years. Playing video games and hanging out with his friends took precedence over study and homework during student days. His parents left academia to start a research company, obtaining published reports for clients. One day a Soviet official from the United Nations appears at the company door with a list of publications he wished to obtain. His visit was immediately followed by a pair of FBI agents asking to be informed every time the Soviet (later Russian) official requested publications. This unique situation gave Naveed an opportunity to provide potentially sensitive documents to the Russians when he took the reins of his parents' company.

Naveed's double-agent life delivers plenty of humorous and quirky moments, such as the time an FBI agent's period almost wrecked his marriage. More interesting to me was listening to Naveed reveal the motivations behind his actions. In appearing to be a turncoat, Jamali knew his best bet to appear legitimate was to appear to be motivated by one or a combination of the usual reasons for betrayal: money, ideology, coercion, or ego. For his personal life, though, setting his sights on a particular girl (now his wife) and wanting a commission to be a reserve officer in navy intelligence propelled him to end his slacker ways and focus on what it would take to achieve those goals. For the latter goal, he saw his unique situation as an opportunity to make that happen.

There are many fun characters in addition to Naveed, including the FBI agents and the Russian official. How the sting progressed, the steps Naveed had to take, and the audibles he had to call makes for fun reading. The story is also about the fine lines the FBI had to walk in dealing with a civilian taking the initiative on catching spies. While giving support and guidance, the agents also had to keep Naveed in the dark about many areas. In order for the sting to be successful, many agency guidelines had to be followed while others seemed to be made up as they progressed. The support and encouragement of his wife was instrumental, too. But so much rested on Naveed's initiative and improvisation. His preparation included coaching and instructions by agents as well as watching a lot of movies and TV series to see what worked and what didn't in different situations. Imagine walking into a tacky chain restaurant to meet a Russian spy where the best guide you've seen in this situation came from Miami Vice and you get an idea of the humor in the book.

Watch the video on the linked publisher's page above to get a taste of Naveed's story as well as his personality, which shines through in the book. Recommended.


As an aside, I love it when I find a book that doubles down on typos. This book has a great example: "near Worchester, Massachusetts, about an hour east of Boston." Riiiiight.

Two comments I left out of the post I probably should have included:

1) The word "catch" in the title is somewhat misleading. But it is...errrr...catchy, and sounds better than "How to Expose a Russian Spy."That title would probably draw in people hoping it was about the Anna Chapman case.

2) A movie of the story is in the works. The working title is "Cold Comfort."