There are some movies currently streaming online that I wanted to pass along to readers.

First up is Coriolanus available for free to Amazon Prime members. Directed by and starring Ralph Fiennes while John Logan adapted the play for the screen. I was impressed by the whole production, which was as troubling on the screen as it is on the page. Set in modern times, the action can be graphic and troubling for younger viewers, so discretion is advised. Fiennes brings a simmering intensity to the Roman general who defends Rome until he is banished, a political victim. It's one of the strongest performances I've seen from him lately. It helps that the supporting cast is strong, too. James Cox's Menenius was especially good, while Vanessa Redgrave's Volumnia provided a believable stern mother to Coriolanus. I even enjoyed Gerard Butler's portrayal of Aufidius. I highly recommend catching this while it is available.

I've not seen the 1984 TV adaptation of Antony and Cleopatra, starring Timothy Dalton and Lynn Redgrave. I'm not sure I'm brave enough to try it, although I did want to mention that it is also available for free on Amazon Prime. 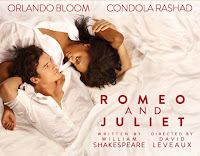 The 2013 Broadway production of Romeo and Juliet starring Orlando Bloom and Condola Rashad was released the following year as a movie and is currently available on Hulu. There was a lot of press about the play when it debuted so I won't go into much detail here. There were some nice touches, but the truncation of the burial vault scene (at least in the screen version) dealt a strong blow against it for me. The performances that stood out to me were Brent Carver as a nervous Friar Laurence and Christian Camargo’s Mercutio. Most of the other roles were played by the book. I'd put this production in the middle of the pack of versions I've seen, still enjoyable in places despite the unevenness.

Chime in if you have seen any of the these films!
Posted by Dwight at 11:08 AM