Not All Bastards Are From Vienna by Andrea Molesini 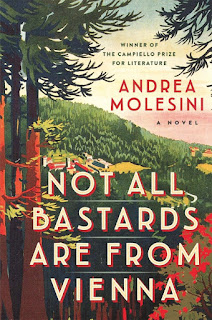 I don't read much current fiction. The current releases I usually focus on are usually either nonfiction or recent translations of older books. I've been holding off posting on a few recent releases that I've read because I couldn't generate much enthusiasm in posting about them. To overcome that, I was going to post about all of them together, but as usual my comments and quotes made the post too long and unwieldy. Instead, I'll push on and start with this book...

First up is Not All Bastards are from Vienna by Andrea Molesini. Set in the autumn and winter of 1917, the aristocratic Spada household finds itself occupied by opposing armies. First the Germans, then the Austrians appropriate the villa and its grounds as they advance through northern Italy. Their villa in Renfrontolo, a small town north of Venice, becomes a way station for the Central Powers as they bog down in their offensive. Intrigues, mostly related to the war but also in romance, abound.

Molesini has created some engaging characters. At the center is Paolo, an orphaned 17-year old boy living with the extended family at the villa. Quiet and studious, Paolo is treated as a kid, both by his family and the (even more insultingly) by the invading armies. The women in the book are strong, forceful characters. Aunt Maria's steely demeanor is backed by her resolve to have things her way. “I don’t think I ever met anyone more conscious than she of her rank in society. She knew in her innermost being that privileges are paid for by responsibilities, and these were two things to be borne with grace.” Paolo's grandmother acts with a similar steadfastness, treating her husband dismissively most of the time. Compared to her husband's flights of fancy, she asserts, “Real life is my province.” The oddities of Giulia, a distant family member, are overlooked because of her beauty and social standing. “She wasn’t in a madhouse because she was a Candiani, and gentlefolk—at least in those days—did not end up inside. Indeed they were not even mad: simply eccentric.” The role of Renato, a "lame giant" from polio, ends up going well beyond his position as steward of the villa.

Paolo's grandfather steals the show. A wonderful character, he calls himself a Buddhist even though he knows next to nothing about Buddhism. He says he is writing a book (he named his typewriter Beelzebub), but no one believes him. A lover of Gibbon, he became exasperated if anyone contradicted the historian. His speech was full of sayings “from the dictionary of proverbs stored in his head.” His bravado, though, masks a humiliation at his deterioration due to age, especially when the family cook defends him from the Austrians. As usual with such characters, there is some substance behind the masks. A marvelous character.

The book has many of the themes you would expect from such a setting, to which I'll add a few fitting quotes.


There are some very good moments in the book, many of the characters intrigued me, and Molesini can deftly turn a phrase. Given all that, I'm not sure why my enthusiasm and recommendation for this book is lukewarm. I enjoyed reading it, but I wonder if all the praise showered on it set my expectations too high. So take my comments with a grain or two of salt (as you should on anything I comment on).


We weren’t at all comforted by the thought that the chickens were a gift. "Nothing comes free of charge, and a gift costs more than anything else": this was one of Grandpa’s axioms, and for years Grandma had insisted that there was a mathematical basis to that truth. I knew that if Grandpa and Grandma agreed on an axiom—something that happened only rarely—it became a law of the universe, neither more nor less certain than the law of gravity.

Email ThisBlogThis!Share to TwitterShare to FacebookShare to Pinterest
Labels: Andrea Molesini, Not All Bastards Are From Vienna