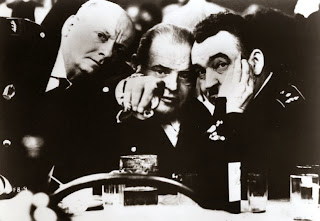 First a few links, since they provide useful information and background:

Miloš Forman is a favorite director of mine. I realized I had not seen any of the early movies he made while still in Czechoslovakia, and I thought it time to correct that, especially since a few of them are easily available. I started with The Firemen's Ball, his last movie in Czechoslovakia before his exile and often called the funniest one he filmed there. I can't comment on the last judgment, but I found it extremely funny (although very tongue in cheek at times).

The film covers an evening where a local fire department holds a ball in honor of their chief. Of course, everything goes wrong. The prizes for a raffle tend to disappear. The organizers have trouble finding contestants for the beauty contest. The alarm for a fire interrupts the ball, but the firemen are so drunk they are ineffective in fighting it. The evening ends with no raffle prizes, no guests, and no present for the fire chief.

It's a simple tale, deceptively sly. OK, not always deceptively. Forman got the idea for the movie from an actual local fire brigade:

“[Co-screenwriter Jaroslav] Papousek and I headed to the Krkonose Mountains, where we started to write a screenplay about an army deserter living in the bowels of Prague’s Lucerna. [Co-screenwriter] Ivan Passer came to help us, but even he couldn’t get us out of our writer´s block. The three of us decided to forget about the script and go to a ball the local fire brigade was throwing that Saturday. We could watch people, get drunk, talk to some girls, and just relax. The Vrchlabi Fire Department was staffed by volunteers. The men mostly worked factory jobs. They came to have a great time. They held a beauty contest for their homely daughters. They ran a raffle. They drank and they argued with their wives. We were completely astonished. The next day Papousek, Ivan, and I just couldn’t stop talking about the previous evening. On Monday, we were developing our impressions into “what-ifs?”. Then on Tuesday, we began writing. The script nearly wrote itself. When any questions came up, we just headed back to Vrchlabi and checked with the firemen. We found the tavern where they drank, played cards and shot pool. They got to know us and talked to us openly. And six weeks later, we had the first draft of “The Firemen’s Ball”.” Source

Not only were the firemen the inspiration, but many of them were in the movie, too.

Forman said he didn’t intend to shoot a political allegory since he didn't like them, but that's disingenuous. It may have not been his main intent but the movie clearly satirizes the Communist system in place at the time. Fortunately he does it at a low level compared to the heavy-handed messages of some of his other films (which would have benefited from the same treatment). The commentary on Communism comes from many different directions. The fire brigade has found out the chief has cancer but don't know if he knows, since the doctor won't tell him. They comment on how messed up the system is, but they promise that they won't tell, either.

The disappearance of the raffle prizes is a major theme in the movie. It starts with a cake, then a bottle of cognac, then a headcheese going missing. The fireman responsible for guarding the table of prizes realizes his wife has taken the headcheese. She scolds him, "Everyone is stealing here and you only watch, you honest idiot." As Forman expresses it in his interview, stealing was so widespread there was a saying: "Who doesn't steal, steals from his family." By the end of the evening everything has been stolen from the table and everyone is under suspicion. The fireman tries to surreptitiously return the headcheese his wife stole, but is seen by the entire crowd. The other firemen chide him, saying he has hurt the reputation of the brigade by trying to be honest—a sad commentary on it (and all bureaucracy).

Not only are the firemen inept at holding the ball, but they aren't too good at their jobs, either. During the fire the men are too drunk to be of any use. The people of the town don't appear better than the firemen, though. Nobody pays their bill at the ball when they rush out to be spectators at the fire, then lie about what they've had when forced to settle their tab. Their idea of helping the poor man whose house is burning is to place him nearer the fire so he stays warm. Someone decides to gather up the raffle tickets to give to the fire's victim, but there are no prizes to hand out and the victim notes "I need money...what good do these [raffle tickets] do me? Of course, the people are behind most of the raffle-prize thefts, too.

The attempt at a beauty contest provides painful humor. Few of the girls want to participate and are very awkward when they do. Some of the townspeople try to bribe the fire brigade judges, who aren't very sure on how the contest is to be run. Several of them spend most of their time looking at an old newspaper clipping of a beauty contest, more subtle commentary on how poorly things work under the current system.

The communist censors declared the movie ridiculed the common man, and they aren't completely wrong. But the bigger target of the movie, which they obviously knew, was the Communist system. Forman was in danger of being sued for "sabotaging the economy" and producer Carlo Ponti demanded his money back. Thanks to backers and fortuitous timing, the film was released and shown in the West just before the Soviet crackdown in 1968. Forman notes the pressure he received was ideological, not commercial. Under the ideological model he could release flop after flop and still receive medals. While he notes he prefers commercial to ideological pressure, skimming through his official website reveals concern that he didn't do things well enough on certain films because of poor commercial success and critical reviews.

That isn't the case with The Firemen's Ball. It received critical praise and enough commercial success to justify a nice DVD release. I mean it to be a compliment to Forman and the movie when I say that my first thoughts when it finished was both "That was cute" and "How subversive!" To be able to walk that fine line, incorporating a light-hearted touch in a political allegory, highlights how well a job Forman, his co-writers, and the cast did in this film. Very highly recommended.

Sidenote: While Bohumil Hrabal's short stories collected in Rambling on: An Apprentice's Guide to the Gift of the Gab and Jiří Menzel's movie based on those stories, The Snowdrop Festival are independent of Forman's movie, there are many similarities. Each has a lightness of touch allowing the satire to shine through, a quirkiness and sadness of the characters, their dependence on alcohol, and the ineffectual nature of bureaucracy. They are all delights, touching on similar subjects in similar ways, but with different emphases. In addition to any coincidences, several of Hrabal's short stories in the collection would have been written around the time that The Fireman's Ball was filmed and released.