Last night I was watching 2013's movie Now You See Me, a film about four magicians/illusionists who pull scams for the benefit of their audiences. After the first job (what appears to be a bank heist), the FBI comes to the illusionists' suite to arrest them. The character played by Woody Harrelson is on the couch reading Roberto Bolaño's The Savage Detectives. The novel's plot about the search for Cesárea Tinajero by two aspiring poets dovetails nicely with one of the movie's subplots: is there a mastermind behind the four illusionists' heists and, if so, who is it? Someone had to have put some thought into what book to put in Harrelson's hands, brief though the shot may be.

I obviously love looking for things like this in movies, additionally so for anything book related. One of my favorite inclusion of a book as a prop comes from an episode of The X-Files television series. "The Goldberg Variations" episode opens with a novice poker player winning big against a Chicago mob boss. The player, Henry Weems, miraculously survives being thrown from the top of a 29-story building by the mobsters. FBI agents interview Weems in his apartment after the incident. As they scan across the Rube Goldberg-like contraptions Weems has created, his bookcase comes into view. A hardcover copy of Michael Lewis' Liars Poker is clearly visible. The subject of the book has little relevance to the story other than the inclusion of "poker" in the title, but the fact that someone had to have thought about putting that book in the shot delights me.

I'm always interested in hearing about book inclusions like this from the screen, large or small, so if you have a favorite let me know! 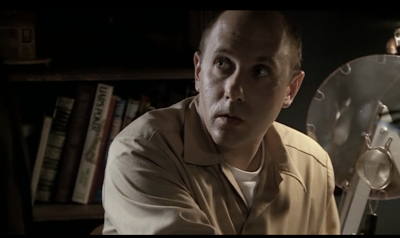 Willie Garson as Henry Weems in The X-Files episode "The Goldberg Variations
(Approximately 13:30 into the episode)
Click picture for more detail
Posted by Dwight at 9:49 AM