Mindset: The New Psychology of Success by Carol S. Dweck 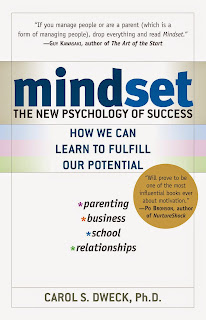 I ‘ve rewritten a post on this book several times because I couldn’t get it right. This post doesn’t get it right either, but I want to pass some notes on this book because it has been an important book for us and our homeschooling efforts this year. While you’ve always heard that your mindset helps determine your success, this book spells out in more detail what that can mean, especially in conjunction with the messages you send your children / students / players / etc. and how it impacts their mindset. What’s also helpful are some of the actionable items (gack…business-speak! forgive me) that are easy to implement.

In short, the book has been transformational for us in our homeschooling, largely in part because of the timing of my reading it. We’re starting our third year of homeschooling and the difficulty of the first year or two of transition seems to have run its course. Dweck doesn’t pose the question directly in her discussion on different coaching / leading styles, but I will—would you rather be a coach / teacher like John Wooden or Bobby Knight? Those of you who know college basketball realize the question goes well beyond the number of NCAA championships and addresses the type of coach / leader / teacher you want to be…a chair-throwing perfectionist or a developer of talent and skills?

For me the challenge was how to take advantage of my boys’ natural love of learning and apply it in our homeschooling. The resistance to certain subjects, especially from one son, could be palpable at times. So what does Dweck mean by mindset and how it impacts us?

For twenty years, my research has shown that the view you adopt for yourself profoundly affects the way you lead your life. It can determine whether you become the person you want to be and whether you accomplish the things you value. (page 6)

On one hand there is the fixed mindset, incorporating the belief that qualities like intelligence are carved in stone and cannot be changed. The person tries to prove to everyone (including himself) that he isn’t deficient in basic characteristics. He tries to prove himself as smart or talented in an attempt to validate himself. Failure is a setback. Given this framework, effort can be a bad thing…it means you’re not naturally smart or talented.

Then there is a growth mindset: a belief that basic qualities or characteristics, including intelligence, can be developed and cultivated through effort. This person relishes challenges, wanting to stretch and develop. Failure provides a chance to learn. They believe effort is what makes them smart or talented.

Here are a few quotes that provided a nice framework for the ideas and what they mean:

Hopefully this gives you an overview of her approach and writing. There is power in our mindset—how we approach our challenges or goals will make a difference in whether or not we succeed. I want to focus more on Chapter 7: “Parents, Teachers, and Coaches: Where Do Mindsets Come From?” As Dweck points out, we don’t intentionally try to undermine our kids but the messages, however well meant, can subvert what we want them to achieve.

Praising children’s intelligence harms their motivation and it harms their performance. How can that be? Don’t children love to be praised?

Yes, children love praise. And they especially love to be praised for their intelligence and talent. It really does give them a boost, a special glow—but only for a moment. The minute they hit a snag, their confidence goes out the window and their motivation hits rock bottom. If success means they’re smart, then failure means they’re dumb. (175)

This doesn’t mean that successes can’t be praised. What it means is that the kind of praise should be monitored. Praise toward effort, study, and choices is good, while praise toward intelligence and talent can be subversive. There are other times praise sends a mixed message, especially when focusing on speed and perfection. How should failure be handled? In an era where self-esteem is to be valued above actual accomplishment, truth and honest constructive (helpful) criticism can be quite the shock to some people. Children learn not just from their results but also from the messages they receive about those results. As Dweck puts it, her book should help parents foster the kid’s learning through stoking the child’s interests and growths.

A central focus about intelligence in the book been is that the brain is like a muscle. The more you use it, the stronger it gets. Use it or lose it. Again, nothing new here, but neurological studies over the past decade or so has shown how this is so. The second focus, and just as important as the first, is that your mindset is malleable. Small changes in communication with students / children / team can make a huge difference in how they respond. The one caveat is that you have to be honest—simply trying isn’t enough. Making an honest effort instead of just going through the motions is what should be rewarded or praised, although how analysis is framed proves to be important, too.

So what did we change? For starters I’m trying some new curricula, which has been a lot more fun for them. I think the most important part was a multi-day conversation at the start of the school year on what was expected of them as students and what they should expect from me as a teacher. We agreed on the methods I would use to challenge them to learn and they would agree to do their best…and we would help each other succeed in these goals. Our agreement covers three areas in more detail: what type of place the classroom will be, what they should expect from me as a teacher, and what I expect from them as students. We even came up with a hokey saying we put at the top of each day’s “learning list:” Today I will learn something new; today I will get better at what I do; today I will give my best effort.” To say that there has been an improvement in their mindset to the school day would be an understatement. Very highly recommended.

It really is a fantastic book. I got a lot out of it when I read it and have used it in our homeschooling too.