Maybe I'm back? I hope so…I've missed this place.

While we're in the middle of so many -ennials, such as the War of 1812, the Civil War, and World War I, I did want to pass on this article from Simithsonian.com about American artists sent to Europe by the War Department (as it was called then) to sketch a historical record of what was happening. While the artists were sent late in the war (coinciding with America's late entry), it "marked the first time that the U.S. government commissioned artists to capture a war effort." [A serious aside to the Smithsonian and other sites…don't make it so difficult to copy a short quote if you'd like an article to be shared.]

Other countries were already doing this, realizing this was a history-changing event. According to the article, the American sketches were much more documentary, though, compared to other artists' expressionistic works.

The American History Museum digitized the collection and a paperback version of Art from the Trenches: America’s Uniformed Artists in World War I by historian Alfred Cornebise will be released next month. 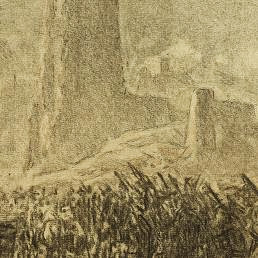 Troops Leaving Esnes by Ernest Clifford Peixotto
Date of work: September 26, 1918
Posted by Dwight at 4:11 AM