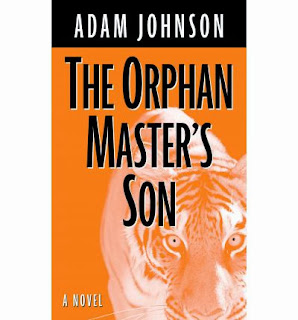 I'll start with a "thank you" to Cynthia Haven at The Book Haven blog for her many posts on Adam Johnson and this novel. Her last post regarding the novel finally pushed me to look for it at my library.

Unfortunately there was a long wait list for the novel in the regular format but the large print edition was available. I recommend choosing an edition that has A Reader's Guide at the end of the novel (which the large print edition lacks). The Guide includes a conversation between Adam Johnson and author David Ebershoff, helpful in many regards including covering real-life elements that make their way into the novel. I hope it comes across as a compliment that after reading the novel I wished there was a bibliography for the works Johnson used in his research. I plan on reading some of the books he mentions in his interviews about the book (follow the links of The Book Haven's posts for a few books cited).

I'm only going to post some general comments about The Orphan Master's Son since it won last year's Pulitzer Prize for fiction and has been covered and reviewed in many places.

The novel centers on Pak Jun Do, a North Korean noticed for his talents and loyalty who quickly rises through the ranks to increasingly important roles. It could be called a Bildungsroman since Jun Do's education never stops as he develops a more complex consciousness in each role. Jun Do was the son of the leader of an orphanage/work camp (the Orphan Master of the title) and a singer. His mother's beauty is noticed and she was abducted for an official in Pyongyang. To avoid showing favoritism to his son, the Orphan Master gives him a typical orphan name from the list of Grand Martyrs of the Revolution. Because of this, Jun Do has to continually explain why he isn't an orphan. North Korean stigmas run throughout the novel: orphans (ironic given how many were made because of the government, vicious in its alleged good intentions), dogs, and black & white movies for examples.

The running joke about Jun Do (think John Doe)'s orphan status is only one small part of the humor in the novel. Many examples come from the absurdity of the government and its loyal followers while others come reflect the inability of the North Koreans to fathom what is actually happening around them (such as Jun Do's ignorance about the International Space Station while listening to their communication transmissions). The story follows one improbable episode after another, believable because of the implausible nature of North Korea.

Jun Do provides a summary of the absurdity of the difference between reality and the North Korean government's version of "reality":

[T]hey lived in a land where people had been trained to accept any reality presented to them. ... [T]here was only one penalty, the ultimate one, for questioning reality, how a citizen could fall into great jeopardy for simply noticing that realities had changed.

The erosion of human values in a totalitarian society has been a common theme in quite a few of the books I've covered in the past few years but this is the first I've read that was about North Korea. Johnson includes many ghastly events, such as blood harvesting and assembly-line lobotomies. His descriptions are matter-of-fact since there is no need to embellish the horrific practices. The desire for complete control shows in almost every action by government leaders, even in individuals trying to provide a more humane system of torture.

Confirmation of the practices described in the novel have been increasing with the greater number of defections, reports, and memoirs, but the book proves to be a compelling read because of Johnson's ability to paint convincing portraits of the internal worlds of characters dealing with the brutality inherent in everyday North Korean life. Johnson continually brings you back to the idea that these are humans with the same needs, wants, and desires as anywhere else. The actions of the totalitarian regime take a toll on almost every aspect of daily life, perverting the dynamics of families and relationship. The inclusion of Interrogator No. 6 as a narrator provides an opportunity to investigate this human cost for one individual. Had Interrogator No. 6 been in a Western country he could be described as an idealistic, loyal middle manager. His parents provided strict indoctrination, trying to make their adherence to the party line more palatable by explaining if they ever had to denounce him they would (literally or figuratively) hold his hands while doing so. It's telling that the interrogator's idea of escape is simply not to care—a mental escape instead of a physical one. That way, so goes his thinking, he could remain loyal but be happy. Jun Do, on the other hand, realizes there is a better world and never stops striving to improve conditions for those he loves…something that can only be done outside of North Korea.

Update: Adam Johnson reading from The Orphan Master's Son for The Friends of the Arlington Public Library.