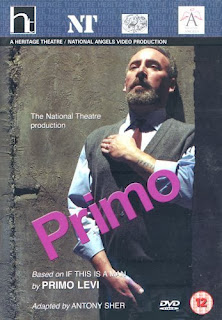 In the comments of my post on If This Is a Man Miguel of St. Orberose blog stole my intended opening for Anthony Sher’s performance in Primo:

Primo Levi's book is a monumental exposition of the concentration camp system, and also of the mentalities that developed inside these horrible places; extraordinary what the prisoners had to become to survive. And the objectivity, the precision, the calmness, the tone he employs is so sober and lucid, you feel the man is whispering at you...

OK, Miguel put more in there and said it better than I could, but it’s the conversational tone of the novel that Sher reproduces perfectly in this stage adaptation of the novel. The film captures a performance of the one-man play. Sher takes a generous helping of direct quotes from the novel and adds tone-perfect bridges to connect different parts of the story, accurate summations to keep the performance within 1 ½ hours, and original lines which fit perfectly with the novel. Any staging of a play or movie about the concentration camps raises delicate questions about how to approach the performance.

I found it ironic that Sher relies almost completely on words, the text (as adapted) highlights Levi's stance that words were inadequate to describe what he experienced. As I noted in the post on the novel, Levi’s claim of ineffability is undermined not just by the novel’s existence but the continued interest in it. Sher stands in front of the audience as a middle-aged Levi (although the book was written within a few years of his return home from the camps), similar in look to several of the author’s most circulated later pictures. The staging is minimal but Sher makes effectual use of the few props (a chair, the wall, the doorway) during the telling of the story. His use of tone and pace adds to the result, as does the haunting cello score by Jonathan Goldstein and the imaginative lighting.

I think what I appreciated the most about Sher’s performance was the matter-of-factness of his delivery, especially during some of the most horrifying lines, since that mirrors Levi’s poise and prose. For Levi’s story there is no need for embellishment, and anyone looking for more insight into the author or his life won’t find it here–Sher remains true to the text even when abridging or adding lines. Many of the themes and motifs I noted in my post didn’t fully make it to the play but that doesn’t make the production any less powerful…maybe less literary? (But then do literary references work better in books, especially when they can be developed further?) Regardless, I highly recommend this production whether as an introduction to the novel or a reminder of its power.


Sher released a book, Primo Time, on the writing and production of the play. While I haven’t read it, excerpts from it can be found at the Guardian. “The Fear” that he mentions in the excerpts is the case of stage fright he had developed…nothing like starring in a one-man play to confront that fear. Here are three of the quoted entries:

9 November 2002: Finished. It's far too long, but I could sense Primo's presence guiding me. I am wrung out; I have cried so many tears.

18 July 2004: Rehearsals start today. The Levi estate adore my script and Nick H promised me the Cottesloe, yet I feel flat. Is The Fear returning?

30 September 2004: The first night. Everyone thinks I'm marvellous. If only Primo would write back to me ...