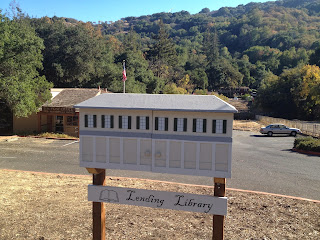 Blogger tells me this is my 1,000th post on this site. So I'll pass along a picture I took today while the boys and I were touring the mining museum in New Almaden, California. I just wish I had a book with me to drop in the lending library.

If you'd like to learn about New Almaden, here's a link that talks about the mining operations for cinnebar. The town was named after the Almaden mine in Spain, mentioned by Pliny the Elder almost 2,000 years ago.
Posted by Dwight at 2:55 PM

Email ThisBlogThis!Share to TwitterShare to FacebookShare to Pinterest
Labels: Footnotes

So much fun along the way — and quite the resource, too. Thanks for your fine efforts.

Thanks William. Been fun shlepping along with you on this.

I think you captured in one word...resource...that I intended this to evolve into. Whether I remember that or not.

Congratulations on 1000 posts! That is indeed avery impressive accomplishment.

Thanks Brian. We will see how it goes!