Women of the Gulag: Portraits of Five Remarkable Lives by Paul R. Gregory 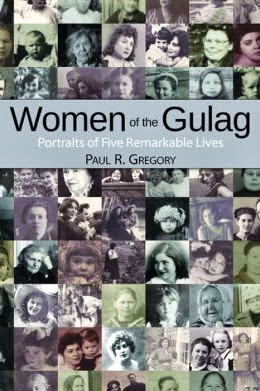 I have not posted on much of the non-fiction I've read this year, something I'm determined to correct starting with this marvelous history/memoir by Paul Gregory.

There is plenty of information available online about the book, so these links will be selective. If you found a post or article about the book that was interesting or helpful, please let me know in the comments and I'll be happy to add it here in the post.

The first six pages of the book at the Defining Ideas journal introduce the five women and include a short biography on Stalin. Please see Gregory's bio page for more information about him and his work.

A post by Cynthia Haven prompted me to post on this book, so I want to make sure and include her posts (which have many great links, some duplicated here). I'll link to her posts that include Paul Gregory in the text. Be sure and look through her informative posts, starting with the post on this book.

Interested in the book and/or the topic but don't feel you can work it into your tottering TBR stack? Take an hour and listen to Gregory talk about the book on C-SPAN. His delivery matches the writing in the book, a flat but effective style because it doesn't try to add to the stories being reported.

If you have any interest in the Gulag system, I highly recommend checking out Anne Applebaum's book Gulag: A History for the genesis and history of the camps.

The Hoover Digest's article by Dr. Natalia Reshetova provides information on how one of the surviving woman in this book was found. From the book's Preface: "This book also would not have been possible without the exceptional and dedicated assistance of Dr. Natalia Reshetova, who uncovered, organized, and remembered so many of the details that capture the sights, sounds, and smells of Russia of the 1930s. Natalia spent many late nights tracking down our Women of the Gulag survivors." (xii-xiii) The article focuses on their effort to track down Fekla Andreeva and her family for information to include in the book.

The History News Network's review of the book provides a good overview.

Clips from the documentary to be released with the book are very moving. See also here.

From the book's press page:


During the course of three decades, Joseph Stalin's Gulag, a vast network of forced labor camps and settlements, held many millions of prisoners. People in every corner of the Soviet Union lived in daily terror of imprisonment and execution.

In researching the surviving threads of memoirs and oral reminiscences of five women victimized by the Gulag, Paul Gregory has stitched together a collection of stories from the female perspective, a view in short supply in the literature. Capturing the fear, paranoia, and unbearable hardship that were hallmarks of Stalin's Great Terror, Gregory relates the stores of these five women--from different social strata and regions--in vivid prose, from their pre-Gulag lives, through their struggles to survive in the repressive atmosphere of the late 1930s and early 1940s, to the difficulties facing the four who survived as the adjusted to life after the Gulag. These firsthand accounts illustrate how even the wrong word could become a crime against the state.

Gregory begins with a synopsis of Stalin's rise to power, the roots of the Gulag, and the scheming and plotting that led to and persisted in one of the bloodiest, most egregious dictatorships of the twentieth century.


So what can I say after all of those links? The title might mislead you into thinking the book will focus on the women's time in the gulag system. Instead the book details how they came under suspicion, usually through their husbands' alleged crimes. The emphasis is on the time of the Great Terror. The Afterword provides information about their experiences in the gulags and their lives after imprisonment. The extra touch that makes the book, at least for me, is how Gregory examines Stalin's directives and ties them to each woman and their family.

It's difficult to adequately convey the arbitrariness and perversity of the decisions in the system. I'll relay this example from Maria's life that touches on one area of the madness: "Maria's marriage to Alexander doomed her and her children to years of privation and separation. Yet, when her marriage should have worked to her advantage, she was turned down for a widow's pension because Soviet law considered their marriage invalid." (194) Maria and Alexander had a church wedding instead of a civil wedding. The union, not recognized for pension purposes, was still enough to label Maria as an enemy of the people when her husband was targeted during the Great Terror.

One point that Gregory makes during his talk, also highlighted in the book, is the fine line between the people at the top and those being persecuted. Roles couldn't really be reversed since the direction was usually only one way--down. What is remarkable is how much the women in or near power understood this. They had plenty of examples of this dynamic, yet they believe they would be exempt because of their innocence. As many of them would find out, innocence had little relation with who was arrested, tortured, and incarcerated. Evidence against them could be easily manufactured or common mistakes described in a sinister light. Gregory's book provides five variations on what such a system produced and inflicted. There are plenty of examples of those who helped make the perverse system function and many who worked against it, however subtle the forms of dissent took. By focusing on women, there are additional dynamics at work, such as hypergamy and cattiness, usually not emphasized in other histories of the period I've read.

Gregory's writing matches the style of his talk, as I mentioned above, a matter-of-factness that allows the stories to shine through instead of trying to dazzle with style. I don't mean to imply that it isn't well written or is boring, though. The structure, alternating the women's stories with Stalin's directives, provides the reader a broader view of what was happening across the Soviet Union during the time covered. Because parts of several women's stories are interrelated there is some repetition, although not much. It's remarkable how broad of a picture these short five (plus Stalin's) story paints of the era. Highly recommended.


Update: For some info about the 2018 documentary Women of the Gulag directed by Marianna Yarovskaya, see the following posts at Cynthia Haven's blog The Book Haven:
Posted by Dwight at 5:17 PM

This sounds like a very much worth reading work. Thanks for posting on it.

I wanted to include some caveats about the book since, although it may have just been me, from the title I was expecting more on the time the women spent in the camps. Instead it focuses mostly on why they were sent to their. Just because it wasn't what I expected doesn't mean it is any less powerful.

A very moving book, and I look forward to seeing more of the movie.

This seems like such an intriguing but perhaps disturbing book. As I get older I find that I am getting a bit squeamish about these books that center upon such hideous repression.

The fact that the does not focus upon the time in the camps might actually add to the air of despair. Sometimes in history, as in fiction, the buildup is the worst.

The emphasis is definitely on the "terror" part of the Great Terror, seen in this case at all levels.

Squeamish? Looks like you'll really dislike some of my upcoming reviews (or rather what I'm covering)...sorry about that!

Sounds like a title I'll need to read! (So much history to read...so little time...)

Though I have found these things disturbing. I still read them myself so I too will from time to time be putting up commentary on some troubling history.