Instant movie for the weekend: A Royal Affair (2012: Denmark) 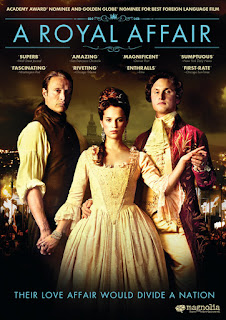 Another historical drama, but this one is less like a soap opera than last week’s recommendation. A Royal Affair, directed by Nikolaj Arcel, is “set in the 18th century, at the court of the mentally ill King Christian VII of Denmark, and focuses on the romance between his wife, Caroline Matilda of Great Britain, and the royal physician Struensee.” (from the Wikipedia entry) The entry provides the production history of the film, which was influenced by Per Olov Enquist ‘s novel The Visit of the Royal Physician.

Christian has taken Caroline for his bride but his mental instability proves to be unsettling for everyone around him except those that wish to control him. After Caroline gives birth to a boy, Christian takes his leave of the court to journey in Europe. Johann Friedrich Struensee, a German physician, is depicted as a man of the Enlightenment having published anonymous tracts calling for reforms. He is approached by Rantzau and his son Brandt while Christian is traveling on the continent. The king's aides concerned about his health, mental and physical. Rantzau and Brandt hope that Struensee can win the job of king’s physician and help the pair return to the king’s good graces. Struensee goes for the interview, which begins like this:

Struensee: “The court thinks you need a doctor. Do you have any idea why?”

S (sits): “What if you weren’t king? What would make you happy?”

C: “To sleep, perchance to dream.”

S: “Often expectations fail, and most often there where most it promises.”

C (looks closely at S, taking his measure): “All the world’s a stage, and all the men and women merely players.”

S: “They have their exits and their entrances, and one man in his time plays many parts.”

S: “There something rotten in the…”

Needless to say, Struensee gets the job. What follows after Christian returns to Copenhagen is a tangled web of scheming by everyone struggling for power: Struensee, the Royal Dowager (Christian’s stepmother) and her son, and members of the council are only a few of the players in the drama. Caroline’s inclusion in the plots begins as she struggles to achieve some level of freedom but her role changes as she finds a kindred soul in Struensee. After the council is dissolved the physician becomes the sole member of the cabinet, passing many laws providing freedoms and reforms to Christian’s subjects. The physician is shown in an idealistic light, although the mask slips occasionally when he uses the same controlling language as the council. The backlash from his reforms and his affair with Caroline generate more machinations by members of the dissolved council, setting plans in motion to place the Royal Dowager’s son on the throne.

Brandt, in talking about his father, provides a warning to Struensee when he quotes from Malory’s Le Morte d'Arthur: “Yes, men have an odd ability to ignore reason when it comes to beautiful young women.” My main enjoyment in the movie came from the relative complex characters, rarely descending to caricatures (although sometimes approaching it). The intersection of desire, duty, ideals, and historical forces makes for a powerful brew. Currently available through instant streaming sources. 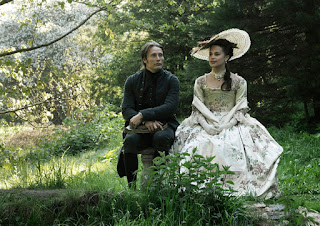 Mads Mikkelsen as Struensee and Alicia Vikander as Caroline Mathilde
Picture source
Posted by Dwight at 5:41 AM

I missed out on that one when it came out. I did watch the other great 2012 movie starring Mads Mikkelsen: The Hunt. I strongly recommend it.

I will have to check that one out. And with a name like Mads Mikkelsen, he has to be good. (Jokes aside, he was good in this.)

It seems I go months without finding anything interesting on instant viewing, then find a bunch I like and a few I have no problem recommending. Fortunately I'm in the latter phase right now.