Honduran archaeologist Ricardo Agurcia Fasquelle, Executive Director of the Copán Association, presents this inaugural lecture in the Great Battles Series. Until recently scholars depicted the ancient Maya as a peaceful civilization devoid of warfare. This somewhat romantic notion has been overturned by evidence of a starker reality: during the Classic period (ca. 250—900 CE) an array of Maya kingdoms were engaged in a series of major wars that ravaged the heart of the Maya homeland. For much of this era the major kingdom of Copán appears to have escaped these conflicts. Everything changed in 738 CE, however, when Copán was dramatically defeated by its far smaller vassal, Quiriguá.

I decided to watch another lecture on the Great Battles Lecture from the Penn Museum. This was the first lecture in the series, delivered October 3, 2012. I recommend the lecture with two important caveats:

With those two qualifications out of the way, here are my notes on the talk, including some of the wording from presentation slides.

How we view the ancient Mayans has changed over time. In the 1940s the Mayans were seen as a theocratic society, occasionally sacrificing a virgin, while gazing at the stars and working on their calendars. Since then their glyphs have been deciphered and much more is understood, including the increase in war. The focus of the last point culminates in 2006’s movie Apocolypto showing mostly bloodthirsty savages. The truth lies somewhere between the two extremes. That Mayans engaged in war is clear though depictions in art, frequency of fortifications, and development of weapons (spears, knives, machetes, and atlatls). During the Classic period Maya warfare was mostly about raids and skirmishes instead of big, pitched battles, short in range and duration. The small scale is a function of the limited ability to travel far while carrying weapons and supplies.

Copán was an open (non-walled) city on the banks of the Copán River with a population growing to around 20,000. The acropolis was the only protected area of the city. Quiriguá was also an open city, on the banks of the Montagua River and growing to a population of 3,000. Neither city was built with an eye toward defense. Both city-states are in a region with shared resources (the most valuable being jade), a distance of a 3-day walk between the two. Copán is the largest and oldest of the two cities, the “big” brother in the relationship, although both have shared history and royal families. Both cities were founded by the same person: K’inich Yax K’uk Mo’, a great Tlaloc warrior. The relationship could be described as a ruler (Copán) / client (Quiriguá) arrangement.

In 725 Copán’s 13th king (Waxaklajun Ub’ah K’awil) oversaw accession of his new Quiriguá subordinate, a stele commemorating the appointment. During the Mayan Classic period there were two major powers—Tikal and Calakmul. Copán had been historically allied with Tikal, as was Quiriguá. In 736, though, the leader of Quiriguá (the one mentioned above appointed by the Copán king) struck an alliance with Calakmul, putting it on a collision course with Copán. On April 27, 738 Waxaklajun Ub’ah K’awil was captured by a war party, marched to Quiriguá, and beheaded. His wife may have been part of the betrayal. The leader of Quiriguá begins to call himself the “black Copán lord.”

Quiriguá flourishes in the aftermath, gaining political and economic autonomy. There is new construction, expanding the city while they control the resources (such as the lucrative jade trade) in the Motagua River valley. Quiriguá is now an independent city/state. Copán stumbles but does not fall. The 14th ruler doesn’t do much since he was on the throne for a short period of time. The 15th ruler of Copán finishes construction on the famous hieroglyphic stairway and other projects. Copán’s dynasty continues through the 16th king. On the Quiriguá Acropolis an inscription tells of a cordial visit by Copán’s 16th (and last) ruler Yax Pasaj on June 28, 810—the cities have reconciled. By 830 both rulers were finished and so were the cities, their people meting away into the tropical forest.

Fasquelle talks about the archeological finds that the teams have made. One of the amusing parts of the lecture is that it is clear that the rivalry between the two city-states has carried down to the different archeological teams and how they view the other city. I mentioned the first question in the Q&A session in the first caveat. The second question addressed why the people abandoned their cities. Fasquelle notes a dramatic population collapse around 900, noting that at Copán it is easier to find remains from 200 BC than from 900 AD. While ultimately we don’t know the reason(s) for the collapse there are several factors we do know that could have played a part. Warfare increased during the late Classic period for whatever reason, possibly an increase in population fighting for limited resources. Remains from the late Classic period show malnutrition. Because of the delicate balance with nature any major change—hurricane, drought, etc.—would have a major impact. Making things more complicated is the abandonment of the Mayan cities in the area took place over a great period of time, at least 100 years instead of all at once. This is another area where investigations are focused.

Again, even though it probably doesn't fit in the loose definition of a great battle it's an interesting lecture. Recommended. 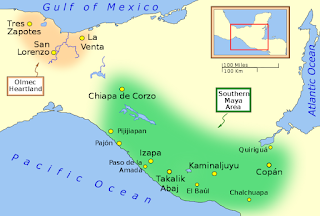 Picture source at Wikipedia
Posted by Dwight at 3:20 PM

I must admit that I never heard of this incident before.

I know much too little about Mayan history and culture. I got a tantalizing taste of it in Charles C Mann's 1491. It sounds so interesting. I must find out more.

Same for me on all counts, although I did get to visit Tulum which was impressive. I wonder how relevant guides and histories are since they seem to be rewriting what is known every few years.