After Thermopylae: The Oath of Plataea and the End of the Graeco-Persian Wars by Paul Cartledge 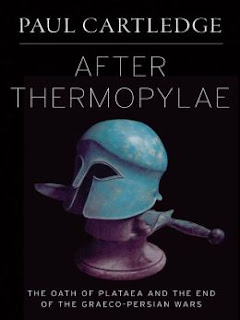 After Thermopylae: The Oath of Plataea and the End of the Graeco-Persian Wars by Paul Cartledge
Emblems of Antiquity series
Oxford University Press, 2013
ISBN: 9780199747320
Paul Cartledge’s name has been mentioned on this blog several times—he is the A. G. Leventis Professor of Greek Culture in the Faculty of Classics at the University of Cambridge. This book is part of Oxford University Press’ Emblems of Antiquity series. The emblem, in this case, is the Oath of Plataea, inscribed on a marble stele found in the early 1930s in the Athenian countryside. The monument itself is considered genuine but the authenticity of the Oath of Plataea is debated—Cartledge believes it to be inauthentic.

So why choose something of dubious validity for the center of a study? Cartledge uses the oath, inscribed between 350 and 325 B.C. describing an event taking place in 479 B.C., as a starting point to look at events, culture, and religion of both time periods while delving into the broader context of the fight for historical memory. The authenticity of the inscribed oath is almost beside the point:


[T]he main point of this book, which is to try to identify and to explain the function(s) the Oath of Plataea was designed to serve in its immediate monumental context. Those functional needs, I suggest, are to be located firmly within a retrospectively triumphalist narrative—or rather story, in the sense of a fabrication—that the Athenians had begun insistently to tell themselves and anyone else who would listen to them from the mid-380s BCE onwards. A story which acquired a new salience and urgency in the desperate times immediately following the Athenians’ calamitous defeat at Chaeronea in 338 [BC]. Those, I further suggest, are respectively the true overall context and the true specific context within which the monument as a whole is to be properly and fully understood. (30)

All of which forms an extended whole in conjunction with my recent post on Professor Jeremy McInerney's lecture. This ideologically motivated commemoration was done by shaping history in many forms and relying on politics, religion, and other contexts to change how the battle was remembered. In recounting the battle, Herodotus gave the highest credit to the Spartans, which would be a major factor in how the event would resonate through history:


Plataea, indeed, could almost be called the great unknown battle in one of the great wars of history. One reason for Plataea’s relative lack of celebrity, as already noted, is that it was essentially a Spartan (and Peloponnesian), not Athenian, victory, and the Athenians have been far more vocal, far more influential over the surviving tradition of the Wars, than the Spartans… . Another is that Plataea was a small state… . Yet a third reason for the battle’s lack of its due meed of celebrity is more technical, and due to the nature of the surviving evidence for it. Herodotus’ account is not just the best that we have, but really the only usable one—in the sense that the others are more or less derivative from it rather than independently grounded and valuable. 88-9)

Despite declaring the unknown qualities of the battle and even with dedicating a long chapter to it, the battle itself is not the major focus of the book and Cartledge emphasizes the paucity of detail. I’ve included a few links on the battle at the end of the post to help provide essential perspective for much of what happened during the long standoff and battle.

So what are some of the other contexts? Cartledge emphasizes the religious contexts, something he feels hasn’t been adequately examined to date. The monument was found near the ancient city of Acharnae, location of the only temple to Ares in Attica (and one of the few in the Greek world). The temple was also linked with Athena, at least the militarized version of her. While oaths were important throughout Greece, Cartledge goes into detail on the importance of oaths to Athenians, especially oaths that “fostered amity and collective endeavor, and particularly in the stasis-ridden atmosphere of the fourth century BCE.” (58)

There are also political and historical contexts tied to the faux-oath. The monument was erected about the time Athenian males were required to take a couple of years of military training. The trainees had to take the Ephebic Oath, also on the monument. Borrowing (stealing?) the glory from the victory of Plataea would have powerful symbolism and gloss over the principle role of the Spartans. It would also help hide the fact that the glory days of Athenian military glory were past. The monument was erected about the same time as the debacle at Chaeronea (the loss to Philip II of Macedon and loss of Greek independence). If erected after the battle, the oath would provide some salve for the loss. If dedicated before the battle, the oath would supply much needed hope in recalling past successes. In either case there had been radical changes since the Graeco-Persian Wars at the beginning of the 5th century B.C., when Greece was fighting to remain free of Persian influence. Subsequent history would show several Greek cities calling on help from the Persians (and receiving it). As part of reshaping history, was the oath similar to the Athenian post-oligarchic amnesty of 403 B.C., in a sense changing memory by choosing what to remember and what to forget?

Ironically, the oath reminds people that many Greeks fought alongside the Persians during the wars as well as portraying the ultimate victors as gracious to those traitors (or at least they meant to be). Cartledge highlights the amazing part of these wars, which Herodotus likewise emphasizes—the near miracle of Greek cities cooperating together in sizeable numbers against the Persians. The cooperation between Greeks that did fight together quickly dissolved after the wars. Regarding the shaping of memory, Cartledge has this to say:


In their art of memory, as with so many other key cultural artifacts of theirs, the ancient Greeks were quintessentially agonistic, indeed antagonistic: competitive to the ultimate degree. Competition affected not just the matter of how great deeds were celebrated and commemorated but also the issue of which deeds, which battles, were to be celebrated, and by whom. … [T]hough the Plataea victory was actually a Panhellenic accomplishment, almost immediately its memory or rather memorialization became a focal point of contention among eternally rivalrous Greeks and their cities. (123-4)

Cartledge includes various means of competition for the way the Persian wars were to be remembered in several areas: monuments, commemorations, histories, myths, epigrams, and others. It’s a very entertaining book, geared toward the general reader. Cartledge foregoes footnotes but provides a “Further Reading” section highlighting sources and helpful details. While I think some knowledge of ancient Greek history is helpful, it isn’t necessary to enjoy the book. It’s a fun approach, using the oath as a means to explore what had changed in Athens and Greece during the 150 years between the Battle of Plataea and the date of the monument as well as unveiling some of the means the Greeks used to shape how history would be remembered.

Additional links and resources listed in the book:


Now, so far as the Oath of the Ephebes goes, that’s all fine and dandy – the reference of that oath is contemporary, and it was in 335 or thereabouts that the whole system of ephebic training at Athens was reorganised for the 18- and 19-year-olds performing a sort of national service at a time of grave crisis for Athens (following the Athenians’ heavy defeat by the Macedonians of Philip and Alexander at Chaeronea in 338). But the supposed Oath of Plataea, if genuine, would have been sworn almost 150 years earlier – so why inscribe it now, round about 335 perhaps?
If, that is, it was genuine?

If you have any other pages you think are helpful on either the Battle of Plataea or the Oath of Plataea, let me know and I’ll be happy to add them.

Update: I meant to add another resource I have read on the Battle of Plataea. Victor Davis Hanson's The Wars of the Ancient Greeks has a good description and a great map about the battle. 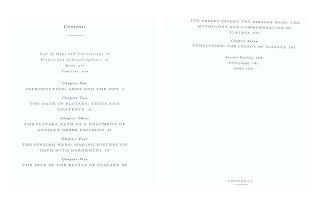