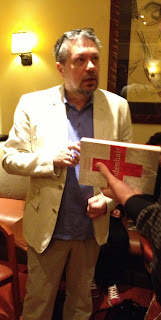 I wanted to post an initial impression on tonight’s event “Mikhail Shishkin's Amazing Maidenhair” before I went to bed. I plan to post more about the event...maybe an extended post with a transcription. I thoroughly enjoyed the event and it turned out to be great location at the Hotel Rex in San Francisco.

The informal setting was great, perfect for a turnout of approximately 50 people. I was happy to have a few moments to chat with Shishkin before the event and Marian Schwartz afterwards. The event started with a reading of a section of Maidenhair near its beginning, Shishkin reading the passages in Russian while Schwartz read from her translation.

I want to note that there is a tension in Shishkin’s works that came out in his talk, with comments such as “The Russian language is my enemy,” “language is deaf,” and the need to “resurrect words to give it [language] life back.” Such comments dovetail nicely with comments in The Light and the Dark, where words are defined as bad translations of the original they attempt to describe. Elsewhere in the book, though, language is lauded for defining reality. In my comments on Maidenhair, I noted that Shishkin focuses on how words define us and provide what remains of us when we’re gone. Maybe it isn't a contradiction, just opposite sides of the same coin? We’ll see if the transcript provides more answers than my questions.

If you get a chance to attend Shishkin's April tour, I recommend taking advantage of it. Many thanks to The Center for the Art of Translation's Scott Esposito for hosting the event. A huge thanks to him for including a question I had about the choice of Izabella Yurieva as one of the narrators (though her 'diary'). Shishkin's answer provided some insight on how to approach Maidenhair.

Thanks to everyone involved for a great event!

Update: A podcast of the event is at the Center's blog. A little bit about the event and a video playlist is available at Litseen.

Email ThisBlogThis!Share to TwitterShare to FacebookShare to Pinterest
Labels: Maidenhair, Mikhail Shishkin, The Light and the Dark

I just listened to a podcast of an event from last year at the centre, featuring Margaret Jull Costa talking about Jose Samarago - I'd love to be in the audience for something like that one of these days...

Dwight - I'm so glad you got to go to this. My neighbor went too (and supposedly picked up a copy of the book for me) but I've yet to hear his report.

There are a few brief comments about the event on the CTL web site already, in which Shishkin seems about as enamored of today's Russia as Thomas Bernhard felt about his Austria.

Shishkin is also appearing tonight (April 5) at Green Apple Books in San Francisco. Alas, I can't make that appearance either.

Tony, yep, I was fortunate. I'll have to listen to that podcast...I wanted to attend that event but couldn't.

I think those comments on the CAT blog were from a previous interview, although he did expand on them. Hope you get your book and his report soon!