Three Percent has published Mikhail Shishkin's April tour in the U.S. As I mentioned in a previous post, I'm attending the April 4 event at the Hotel Rex in San Francisco, which will include translator Marian Schwartz, too.

If anyone would like to meet up before the event just drop me a line. 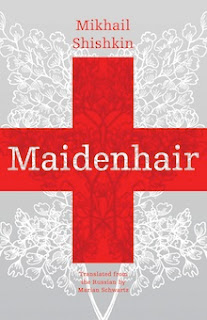 From the Brown Paper Tickets site:

Awarded numerous prizes in Russia and acclaimed as a masterpiece, Mikhail Shishkin's Maidenhair has been compared to Ulysses for its intricate plot and exuberant prose. Ostensibly set on the Swiss border, where asylum-seekers attempt to gain entry against implacable guards, the book encompasses numerous narratives, ranging across literature, philosophy, wild jokes, and the history of the 20th century. The Dallas Morning News called it "true literature, a phenomenon we encounter too rarely in any language."

In this event we welcome the acclaimed, multi-award-winning Russian author and his remarkable wordsmith of a translator, Marian Schwartz, who has translated Russian literature for over 20 years, including classic works, like Ivan Goncharov's Oblomov and Mikhail Bulgakov's White Guard, and contemporary greats, like Andrei Gelasimov and Olga Slavnikova.

They'll be in conversation with the Center's Scott Esposito for a delightful exploration of Russian literature, from Tolstoy and Chekhov up to the latest, amazing work. Editor of the Center's online publications and co-host of its podcast, That Other Word, Esposito has covered literature for a wide variety of publications, including the San Francisco Chronicle, The Washington Post, and the Los Angeles Times.

It all happens in the swank interior of the Hotel Rex, long a home-away-from-home to artists and writers from all around the globe.

My comments on Maidenhair can be found here.

Would love to meet up for a drink and a Russian lit discussion someday, Dwight, but I suppose our Platonov adventure in mid-April will have to suffice for now (no plane ticket necessary for that). Have a blast at the event--will try to avoid being too envious and will also try to clear some room in the TBR to add "Maidenhair" to the pile eventually.

Add it to the pile soon...it's worth it. I've got "The Light and the Dark" by Shishkin to read by Thursday night... but first I need to finish and post on the wonderful book I'm reading on Demosthenes. *sigh* I'll get there, sooner or later.

Dwight - I was hoping to make this after reading your post about it, but it turns out I have to be elsewhere that night. Sounds like it will be a great event I passed your invitation onto my neighbor, who's a big Russophile. He was very much interested and may well show up.

Sorry you won't be able to make it, but thanks for passing on the word.