The Fate of Achilles by Bimba Landmann 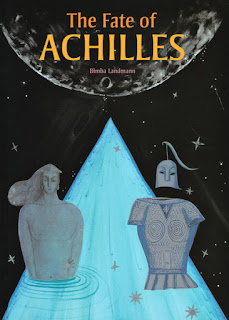 When I read the review of this book in David Meadow's post at rogueclassicism I thought it would be a great way to get my boys interested in a version of The Iliad. Unfortunately neither of them was inclined to pick up the book on their own but they have responded well to my reading of it to them.

The review is pretty much spot on. The first half of the book tells how the arranged marriage between King Peleus and Thetis happened and Achilles' education under Chiron. The second half covers the storyline of The Iliad. The book combines the different sources for the material into a coherent whole. The style mimics Homer, addressing the characters and raising questions that are fun to cover with the kids, such as choosing between Achilles' destinies or how Zeus will intervene to fulfill Achilles' wishes.

Regarding what level of reader for which the book is best, the story is a little much for the 6 year old but he gets most of it. The 9 year old understands it easily but has trouble with a few of the words and many of the names--he latches on quickly, though. The recommendation from the Getty Publications site (see below) is ages 9 to 12, which I think is about right for the age to read it. As I mentioned, younger kids should enjoy it if it is being read to them.

From the description on the Getty Publications page:

When Achilles was born, the Fates―the three female deities who shaped people's lives―announced that his destiny would be tied to that of Troy. Son of the nymph Thetis and Peleus, king of the Myrmidons, the fiercest warriors in all of Greece, Achilles was raised by the centaur Chiron, who taught the boy fighting skills and imbued him with a strong sense of honor.

When asked to help avenge the Greeks against the Trojans, who had kidnapped the Greek princess Helen, Achilles answers the call, even though his mother warns him that battling the Trojans will bring him eternal glory but will cost him his life. Fighting alongside the troops of King Agamemnon, Achilles's sense of honor and capacity for empathy are both tested. Achilles goes on to meet his fate against the Trojans but, in the end, who really decided his fate? Was it the gods, or was it Achilles himself? This epic tale is enlivened by bold and beautiful illustrations reminiscent of ancient Greek art.

Email ThisBlogThis!Share to TwitterShare to FacebookShare to Pinterest
Labels: Books for children, The Iliad