His Only Son by Leopoldo Alas 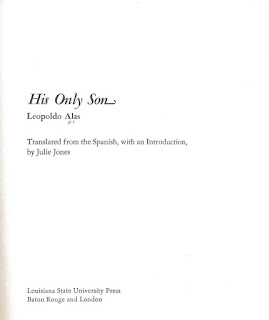 Previous posts on the novel that cover the plot and several of the characters:
Story, part 1
Story, part 2; Bonifacio Reyes
Two women: Emma and Serafina

While His Only Son shares many similarities with La Regenta, there are some changes in emphasis and approach that make it more disturbing. Set in a "third-rate capital" city in Spain, His Only Son looks at the past in two seemingly contradictory ways—romanticizing the past while at the same time satirizing that romanticism. We also get to see many (but not all) the inner thoughts of the characters. This combination of an ironic, naturalist novel with a psychological approach causes some of the difficulty in the novel. From The Decadent Vision in Leopoldo Alas by Noël Maureen Valis (also LSU Press, 1981):

How did one reconcile the idealism of the hero Bonifacio Reyes’ paternal quest with the pitiless realistic satire and irony which succeeds in leaving one with a bitter aftertaste?

The two strains of the satirical/ironical and the psychological, in my view, do not blend very well in Su único hijo; indeed, they set up a jarring effect on the reader because each tendency is heading in a different direction. The humorous vein debouches into the traditional current of Spanish realism which, since Cervantes, has characteristically been leavened with the agent of satire and/or irony. But the pshychological treatment in Su único hijo points to a different form of novel writing, a form which has more in common with the contemporary decadents, symbolists, and psychological idealists than with traditional realism or naturalism.

Clarín’s [Alas’ pen name] inner unrest was finely attuned to the same uneasiness which had spread through Europe. He too sought more profound realities through the exploration of the psyche and the dream and the intriguing relationship between the arts—in particular music—and life. These preoccupation which are manifest in Su único hijo lead Clarín to neglect to a certain extent the external in order to concentrate on and enhance the internal.
(page 109)

The ending, which I haven’t gone into because of the plot twists involved, highlights the difficulty in resolving these two approaches. Bonifacio (Bonis) has the son he has always dreamed of. Sort of. He dreams of what he will provide for the boy, yet at the same time the reader is painfully aware of what Bonis’ daydreaming has gotten him so far. Not to mention the complete rejection of motherhood by his wife, Emma. Even with the caveats the novel provides while leading to the ending, a guarded feeling of hope and regeneration resides in the novel. I sometimes talk about unasked questions at the end of a novel, and the obvious one at the end of His Only Son is what’s in store for Antonio Reyes, the son?

It turns out that Alas left a fragment titled “Una medanía” (I’ll assume that would be A Mediocrity…please correct or let me know of other connotations) that helps define where he was going with His Only Son. I’ll be quoting liberally from Valis’ book (noted above) since this compiles a lot of what is available on the intended sequel (or at least what was available 30 years ago). The context and content of the sequel helps clarify how Alas wanted His Only Son to be viewed. Valis discusses one observation

from Carolyn Richmond, who views Su único hijo as an introduction to the projected but unfortunately never completed triptych of “Una medanía,” “Esperaindeo,” and “Juanito Reseco,” and who offers a solid explanation of why these novels were never finished. In her view,

Su único hijo represents the search and hope for faith, [while] “Una medanía” is the complete disillusionment. Perhaps the necessity Alas felt to write Su único hijo before “Una medanía” reflects a need on his part to understand, and even justify, the negative and rebellious Antonio Reyes. His suicide, however, would symbolize the destruction of Bonifacio’s only hope, and we would indeed be left with “el vacío total.” Quite possibly this prospect so appalled Leopoldo Alas (who, himself, was going through a period of tremendous pessimism and doubt) that he could not bring himself to describe it. And without the “center panel” of his “triptych,” he may have eventually lost interest in, and a reason to finish, the “panels on either side.
(pages 183-4)

Here are a couple of quotes that help provide some overview and context for the sequel:

Most of the fragment centers upon the problem of Spain’s intellectual life with the focal point on one individual, Antonio Reyes. Unlike the Ateneo members, Antonio is no intellectual fraud, but in a larger sense he typifies the fin de siècle crisis in Hispanic thought and life because he is a paralyzed intellectual. Because he is unable to exercise his will, to put into practice the desires and illusions he nourishes within himself, he is as anemic as any of his peers, but he is cursed with an awareness of his abulia. Like his father Bonifacio, he prefers daydreaming to activity, but unlike the older Reyes, who is a highly emotional and intellectually untutored fellow, Antonio Reyes is, above all, an intellectual. Antonio’s abulia stems not from a lack of ideas to stimulate him but from the crushing influence of thought itself.
(page 185)

This refusal to participate [in public life] extends to nearly all forms of activity and, in sum, signifies Antonio’s removal from life itself. Like many of Alas’ characters, he behaves negatively, taking “evasive action,” hence, not coming to grips with life and, indeed, defeated by life, he withdraws more and more from it and encloses himself in a world of daydreams.
(page 187)

In an ideal world of translated books, His Only Son would be available with the fragment “Una medanía” as an appendix. Although I realize I’m daydreaming just like Bonis…I should settle for an in-print version of His Only Son so people can easily enjoy this remarkable novel.

Email ThisBlogThis!Share to TwitterShare to FacebookShare to Pinterest
Labels: His Only Son, Leopoldo Alas