Five Billion Vodka Bottles to the Moon: Tales of a Soviet Scientist by Iosif Shklovsky 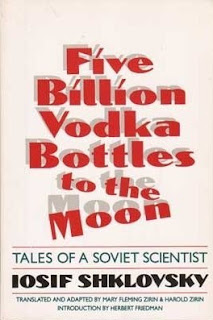 I don’t post on all the nonfiction I read but I enjoy passing on some of the offbeat books that I think others would enjoy.
I’ve recommended this book for a long time and after I wanted to see if it held up as I remembered. It did…and more. Some of the added resonance may have been from the recent reading of Vasily Grossman’s Life and Fate. I read this again and get the same feelings I did on the initial read—an incredible respect and admiration for Iosif Shklovy, quirkiness and all.

The introduction by Herbert Friedman, Emeritus Director of the Space Science Program at the Naval Research Laboratory, provides an overview of Shklovsky’s scientific contributions in laymen’s terms and paints a portrait of a man realizing the position he is in, recognizing both his talent and his limitations. For Friedman, Shklovsky shows a dedication to the facts and truth, regardless of the strictures and penalties he had to endure simply because he did not always toe the party line, yet he showed a love for his country and Israel that transcended the ever-changing political whims of the day.

I’ve gotten a reputation for the funny and sad stories I have to tell. It would be a shame for those tales, all drawn from real life, to perish with my dust. In early March 1981, while I was vacationing at the writers’ retreat at Maleevka, (footnote: A so-called House of Creative Work near Moscow run by the Soviet Writers’ Union) I decided to write some of them down. I felt that I ought to be able to write as well as the prose writers and journalists at the retreat—whom I found overall to be mediocre and often just plain dim—were struggling to do. Irritation also goaded me: some of the literary fraternity around me had written about the life of science—and, God, what rosy drivel that was!

And what a collection of non-drivel Shklovsky provides in the book. The first chapter still remains a favorite of mine. October 1941 and the scientists are being evacuated from Moscow to the middle of nowhere. Shklovsky, in order to shut up a deferential undergraduate student who asks him for something he may have on physics, hands him Heitler’s Quantum Theory of Radiation, a book he had only read through the introduction and first paragraph before getting bogged down. The undergraduate hands the book back to Shkovsky: “It was a hard book, but very thorough and informative. Thanks a lot,” the kid added. The kid turns out to have been Andrei Sakharov. Like Sakharov, Shklovsky’s concern for human rights shows through in his tales.

Despite his accomplishments and international reputation, Shklovsky was denied access to travel from the USSR:

During those years I had done more than a little internationally recognized work, and therefore I was always invited under the most advantageous conditions, but I was always refused. It was evident that somewhere in the secret chancelleries of the Ministry of Love [his term of endearment for the NKVD], there was a hitch in my dossier—I can't for the life of me figure out what—that made my pitiful but persistent attempts to take part in international scientific life totally unavailing.

When allowed to travel, he was either under heavy surveillance or given a pittance to cover his fees. He finally gets to see Paris, yet has only seven francs a day to cover expenses. For a week he lived on apples and frankfurters in order to enjoy the city. Given the many restrictions and laughable directives, it’s a wonder anything was accomplished by him and other scientists in the USSR.

Oh, the title? It comes in a chapter dealing with Shlkovsky’s musing on various failings of the Soviet system, starting with the annual amount of prisoners sentenced in Rostov each year at the time and trying to extrapolate to the entire country (readers of Maidenhair will remember the location from Isabella’s diaries). In trying to give a sense of large numbers to a lay audience, Shklovsky looks at the total annual wages in the Soviet Union at the time, 150 billion rubles, and the rational expenditure on ‘vodka and rotgut’, about 10% of the wages. Translating that into 5 billion half-liter bottles and looking at their length laid end to end, he comes up with an estimate of 400,000km (around 240,000 miles), an average distance of the earth to the moon. Shklovsky’s observation on the consumption of vodka remains one of my favorite comments: “Of all our country’s considerable achievements in space, that is surely among the most impressive.”

This looks fantastic and I must have it.

Fortunately it's easily available even though out of print. Would love to hear your thoughts on it!