Death of an Athlete by Miklós Mészöly: links 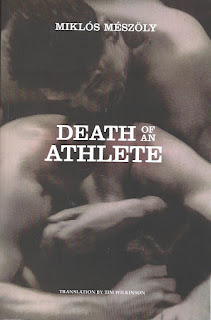 I'm having trouble finding much about Miklós Mészöly in English. Hungarian Literature Online has several posts on the writer and the recent English translation of Death of an Athlete. I’ll have a separate post on the book but wanted to provide these links on Mészöly and the novel.

Those half-dead sentences. Miklós Mészöly: Death of an Athlete

The ostensible impetus for the novel — that the close female companion of the recently deceased athlete, Bálint Őze, records her memories of her lover — is at every turn undermined by the process of memory itself, its twists and turns and lack of perceptible logic. The "official" narrative that the regime clearly seeks from the narrator is one that she can never fulfil, as she herself is well aware, often giving voice to her self doubts as to this task. … The narrative is extremely condensed, and in combination with the associational technique, may leave the reader feeling they are wandering through an infinitely complex labyrinth of memory. One in which, however, it is a privilege to dwell.

Excerpts from the book, including the opening passage and an extract from an essay by Mészöly:

I seriously think that the only person who can be truly objective is one who also has good reason to be biased. There is always a touch of weakness in true understanding. That kind of thing does not go down too well these days, of course, being judged a cowardly line of thought.

Four years ago Georges Kassai sent me a copy of a valuable essay published in Revue d’Études Françaises about the role light plays in the work of Mészöly and Camus. … With Mészöly, he writes, the light in his short novel Magasiskola (High School, 1956) is revelatory; in Death of an Athlete it compels a person to consummate a life lived at full intensity.

The Camusian light illuminates a cruel, absurd world but one that has to be accepted. Or in other words calls upon one to revolt. The object of that revolt is not historical but ontological. In Mészöly’s Saulus the blinding light calls upon one to convert; in Death of an Athlete it compels a record of one’s existence, Kassai notes.

An even quieter revolution V: A high mark for Miklós Mészöly
More on Mészöly’s life and work:

In an essay volume entitled A pille magánya [The Loneliness of the Moth], published in 1989 (i.e. on the cusp of Hungary’s nominal democratisation), Mészöly himself notes:

To be very honest, it was not purely on an appealing whim that I chose a Biblical quote as the epigram for my 1968 novel Saul, which relates a big parable in sporting terms and similes. No, it was very deliberately. Sport without a soul is nothing. As is a soul without sport. All one has to do is put in place the words, the sense and practice of the words.

The Biblical quote in question (perhaps not surprisingly) was drawn from Paul’s first letter to the Corinthians: “Know ye not that they which run in a race run all, but one receiveth the prize? So run, that ye may obtain. And every man that striveth for the mastery is temperate in all things. Now they do it to obtain a corruptible crown; but we an incorruptible. I therefore so run, not as uncertainly so fight I, not as one that beateth the air.” Unlikely as it may seem to anyone not familiar with the two works [Saul and Death of an Athlete], that instantly ties the two novels together conceptually.

A portrait of Mészöly

Though he did not take part in Hungary's 1956 Revolution as a combatant, he did play a role in working out how to formulate the demands of the Writers' Union. In 1957 a volume of his appeared under the title Sötét jelek [Dark Signs], after which a critique by the Party paper effectively put a ban on his work; he was put under surveillance, his phone was tapped. In the early Sixties, for a few months from spring until autumn, he spent time in a valley near Szekszárd, writing the novel Az atléta halála [Death of an Athlete]. In 1963 the experimental stage of the National Theatre at Miskolc presented a play of his under the title of Az ablakmosó [The Window-Cleaner]. This had a run of altogether two performances because it was summarily banned. The play was also printed, along with an explanatory piece, in the literary magazine Jelenkor, which stirred up a renewed political kerfuffle. After the new novel had received several rejections to publish it in Hungary, he came to terms with a publisher in Paris, which is why the book first appeared sooner in French translation as Mort d'un athlete than in the language in which it had been written, and indeed one year later it had also been published in German, and only then did it finally appear in Hungary.

Mészöly’s author’s page at Publishing Hungary includes biographical facts and some information on four of his works. (Hat tip on the bio: literalab)

Dwight - Not sure how I heard of Mészöly, but I picked up one of his books (Disenchanted Variations) in French translation last year. I've yet to get to it, but your posts about him have moved it up several notches in the TBR pile.

I look forward to hearing about the book. I'm hoping more of his work will be translated into English.