The Woman in White by Wilkie Collins (Audiobook) 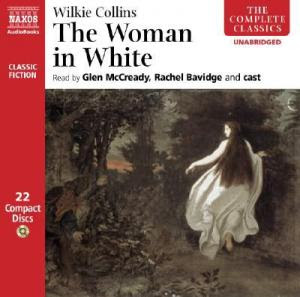 This isn’t intended as commentary on the book by Collins but some notes on the Naxos audio reading of the novel. I’m not sure why I picked this out at the library but it turned out to be a delight. The cast does a very good job, not just in their narrated character but in a reasonable consistency of the other characters they have to portray in conversations. Glen McCready narrates Walter Hartright’s sections well but it’s the other characters he portrays that bring things to life. I was hooked as soon as he exaggerated Professor Pesca’s Italian roots in his language (despite being described as “a perfect Englishman in his language”). The star of the show, as he is in the book, is Count Fosco despite his limited direct appearance. The other readers take pains to emphasize the slimy and self-inflated character, although it’s the conversations with his pets that I’ll probably remember most. Not a dull moment in the twenty-eight hours--a showcase for a perfect match between novel and medium.

Email ThisBlogThis!Share to TwitterShare to FacebookShare to Pinterest
Labels: Audiobooks