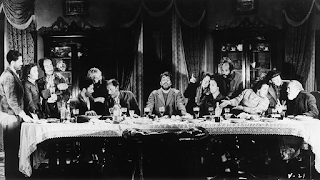 This turned out to be one of the most disturbing movies I’ve seen in a while. Luis Buñuel loosely adapts and updates Benito Pérez Galdós’ novel Halma (1895).

A quick overview of the plot: Before Viridiana takes her final vows as a nun she is invited to visit her widowed uncle. Initially reluctant to go, she complies with the pressure from her Mother Superior who thinks the novice owes respect to her sponsor. The uncle, seeing a strong resemblance between Viridiana and his dead wife, plots to marry the young girl. His plans go awry and tragedy strikes. Viridiana leaves the convent and, against the wishes of her uncle’s illegitimate son, she invites derelicts to live in one of the buildings on her uncle’s estate. When Viridiana and Jorge (the illegitimate son) leave the estate for a few days, the derelicts break into the house and hold a party that degenerates as the evening goes on (and the wine flows). The owners return before they were expected, finding a mess. More tragedy ensues and the movie ends with Viridiana a broken soul. Michael Wood’s essay at the Criterion Collection site, Viridiana: The Human Comedy, covers the history and impact of the movie as well as provides more detail on the film than I wanted to present here.

Since I haven’t read the novel Halma I can’t compare it to the movie version, which is fine since Buñuel used it as a loose framework and updated the setting to the (then) current time. Instead of my usual approach I want to focus on what I found so disturbing about the movie. The most powerful scenes in the movie revolve around the beggars’ banquet and the derelicts’ vicious behavior, calling into question the usefulness of Viridiana’s (and by implication, anyone’s) charity. It’s a very bleak outlook on life, reinforced by Jorge’s saving a dog that was tied to a moving cart. Jorge takes pity on the dog, buying him from his master so the dog will no longer be dragged along by the cart. As he walks across the nearby field, pleased with his action, Jorge doesn’t notice a dog tied to another cart dragged along the road. In other words you can’t save them all. Giving and receiving help is just the luck of the draw.

The role that guilt plays in the characters’ lives proves to be problematic. Viridiana seems conflicted after her uncle’s suicide, at the same time feeling both responsible and blameless. Ironically, the fallout comes after an act of charity on her part when she agrees to dress in her deceased aunt’s wedding outfit. The resulting conflict drives her desire to see good deeds done through her inheritance. When confronted on how few her charity will benefit, Viridiana confirms that it will be small but she does what she can. The perversity resulting from her attempt scars her, resulting in a numb existence. The uncle suffers from guilt because of his attempted actions, not because he’s successful. His actions with Viridiana drive him to suicide and atonement through his will, where he also tries to redress abandoning his illegitimate son. There’s a strong link between Jorge, the illegitimate son, and the derelicts. None feel the slightest guilt for their actions or any code of ethics that they must respect—they feel they have been slighted by society through no fault of their own and behave accordingly.

All of which leads back to the role of charity. Why perform it? Why receive it? Who does and doesn’t deserve it? The good that accrues during the act seems to benefit the giver more than the receiver, at least until the end of the movie. A clear example of this lies in the actions of Ramona, the uncle’s maid and recipient of his charity. It’s clear she feels the uncle’s actions are disgusting but she helps in his attempted seduction of Viridiana out of a sense of loyalty. The derelicts mouth their gratitude but it’s clear they will not reform their behavior. Many of the acts of charity are driven by Christian belief and duty--is the benefit meant for the giver or the receiver? Another dimension in Viridiana’s giving, whether to the derelicts or to her cousin, lies in the belief of self-help and improvement. What happens if that is lacking?

Buñuel’s vision and message are bleak despite plenty of humor in the movie. The comic moments are usually rich in irony, providing disappointment along with the smiles. The Criterion Collection provides additional interviews and excerpts that highlight the political nature of Buñuel’s choice of this project as his return to Spain as well as the fallout from its reception. I watched the movie two weeks ago and still feel unnerved by it. Highly recommended.