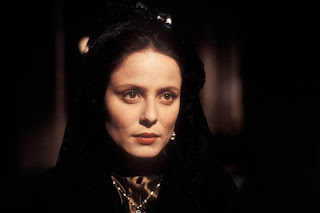 I’m always happy to post about a good adaptation from novel to screen and this one is a pretty good one. The IMDb.com page gives more detail on the cast and other details. As usual, I focus more on the differences between the novel and the adaptation rather than provide a full movie review. (If unfamiliar with the story, please see the posts on the novel.)

The TV series format works much better for a lengthy novel like La Regenta. There were two main concerns I had before watching the series: 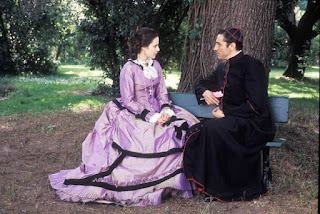 There were other areas where the series excels, taking advantage of the different medium to highlight certain areas. Very little was changed for the canon Fermín de Pas, for example, but in seeing his vanity, quest for power, and cravenness before his mother he seemed even more of an oily character. In addition, minor changes help drive home a point about certain characters. Seeing the canon’s mother chomp on a cigar reinforces her tough-as-nails character. While Ana watches Don Juan Tenorio we see her on the stage with Mesía playing the central roles of the play (at times) instead of just reading about Ana’s feeling of being transported to the time of the play.

With almost no changes to his character from the novel I couldn’t help but wonder how Victor Quintanar became a judge, a question that didn’t occur during my reading of the novel because of the history provided. Only after he discovers his wife’s infidelity does the richness of his character shine through on the screen, becoming more than just an irritating clown at soirees. The novel had provided much more of his background and the extraordinary circumstances of his marriage to Ana, providing more depth to his character earlier than in the film. Another example where the novel was followed faithfully but still came across differently was seeing the importance of Petra, Ana’s maid, to many of the events and intrigues. Although Alas makes clear how central her role is in the novel, seeing her initiate or abet so much on the screen made it clearer for me--I don't think it a stretch to call her one of the major characters. One thing the series didn’t attempt to replicate was the “free indirect style,” mentioned in my introductory post on the novel. While this reduces insight into the characters the series did a good job of filling in some of these blanks through other means (as noted above).

The scenery is gorgeous, providing a glimpse of what Alas saw since many of the settings are in Oviedo (Vetusta) and around Asturias. As one of the crew members mentions in one of the extra features, to prepare some of the locations all they had to do was cover the power lines. There is some nudity, which I don’t usually mention, but (speaking from experience) it may be an issue to people around you on a plane.

Highly recommended. The three episodes appear to be available online (without subtitles). 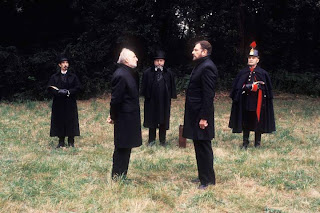