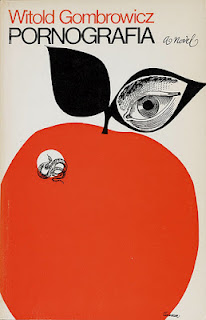 I'm having trouble getting motivated to read or post so I'll provide a wrap-up on Pornografia that is heavy on links, quotes, and impressions. First, the summary from the Publishers Weekly review (taken from Bacacay: The Polish Literature Weblog):

While recuperating from wartime Warsaw in the Polish countryside, the unnamed narrator and his friend, Fryderyk, attempt to force amour between two local youths, Karol and Henia, as a kind of a lewd entertainment. They become increasingly frustrated as they discover that the two have no interest in one another, and the games are momentarily stopped by a local murder and a directive to assassinate a rogue member of the Polish resistance. Gombrowicz connects these threads magnificently in a tense climax that imbues his novel with a deep sense of the absurd and multiplies its complexity. Gombrowicz is a relentless psychoanalyzer and a consummate stylist; his prose is precise and forceful, and the narrator’s strained attempts to elucidate why he takes such pleasure at soiling youth creepily evoke authentic pride and disgust. Borchardt’s translation (the first into English from the original Polish) is a model of consistency, maintaining a manic tone as it navigates between lengthy, comma-spliced sentences and sharp, declarative thrusts.


My posts on (and around) the novel:

It’s easy to tell I’ve become a fan of Gombrowicz and this book highlights much of what I enjoy about his writing. The themes at its heart lie with the interaction and influence between youth and maturity (or you can call it naturalness and artificiality, or nature and culture, or controlling and being controlled). The interaction, straight-forward at first, becomes complicated as thoughts and being intertwine. One example begins with the narrator Witold’s ecstasy in church, not from religious matters but from seeing two beautiful adolescents. The part of the body he first notices are their necks, then their body parts begin to merge in his imagination:

What’s this? It was as if the nape of her neck (the girl’s) was taking a run for and uniting itself with (the boy’s) neck, this neck as if taken by the scruff was taking the other neck by the scruff of the neck! Please forgive the awkwardness of these metaphors.
(page 24)

Witold and Fryderyk attempt to turn this imaginary combination of the two kids into a real, carnal coupling. Along the way, the friendship between Witold and Fryderyk deepens in a manner such that they begin to identify with each other, think the same thoughts and anticipate the actions of each other. There are other mergers along the way, leading to an ending where the four characters briefly become one.

There are several such troubling cases of symmetry, pairings, and mirroring throughout the novel. Another example starts with the imagery of Henia and Karol killing a worm (see my first post for the excerpt). Later, after Vaclav sees Henia toying with Karol (although Vaclav doesn’t know it is staged) he declares he will kill Karol like a worm. Once again this sets the stage for the final scene.

While there are many humorous things Gombrowicz does in his narration, I wanted to point out the use of parentheses around (the boy) and (the girl) as seen in the above excerpt. Like many other things in the novel, this usage is open to interpretation. The narrator promises he will explain why he uses this notation for Karol and Henia but never does. There’s a hint later on that, while maybe not correct, provides plenty of tongue-in-cheek humor (which leads me to believe that it is not incorrect). In a letter to Witold, Fryderyk uses symbols and characters’ initials to find an explanation on what has happened and how things can play out:

Don’t try to understand it…you would have to be much more immersed in the novel for that excerpt to approach making sense (and for me it doesn’t go beyond the ‘approach’ stage). The key lies with the formulae and the chemistry. Witold and Fryderyk attempt to manipulate Karol and Henia just like a chemistry experiment. Alas, there is no apparent chemistry between the youth. Like any pun or joke, it loses a lot in the explanation.

There are a lot more topics to delve into, especially the character of Fryderyk and the role religion plays in the novel, but I’m going to end here. Please forgive my erratic spelling of characters’ names across the posts. I’ve tried to remain consistent with the novel’s spellings when discussing the novel, but lapsed into the Anglicized spellings that were used in the movie occasionally. Hopefully I haven’t confused anyone.

An interview with translator Danuta Borchardt:

Also, in Pornografia Gombrowicz tests the notion of belief in God versus non-belief. According to Jerzy Jarzębski, one of Gombrowicz’s foremost scholars: “Pornografia is blasphemous in the sense that it presents traditional culture and national customs in a state of exhaustion and atrophy.” Jarzębski, suggests that Gombrowicz’s ideas may originate from the existentialists’ “death of God,” from old age generally, from World War II and the demands it placed on Polish society, and from the collapse of moral values.

Another interview with Borchardt (via podcast) can be found here

More on the novel (and some suggestive covers) at Gombrowicz.net

An excerpt at The Quarterly Conversation