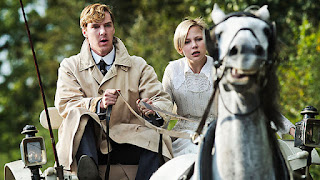 OK, those instructions are meant for me, but I'll pass along the links and information as I get caught up on what I've missed being offline the past few days. BBC Two has started airing Parade's End. Episode One is available at the link (currently only for the UK? Check back soon). The few articles I've seen have been favorable (follow the links on these pages, too):

Euan Ferguson's review at The Guardian

James Walton's review at The Telegraph

An interview with Tom Stoppard for Parade's End and Anna Karenina


While I'm on the subject, here's my summary post on Parade's End

Thanks for this. I'm guilty of having the book on my shelf and not reading it - I bought it in 2000. Benerdict Cumberbatch was fantastic as Sherlock Holmes.

It definitely takes commitment, especially so much of the time you're wondering what in the world is going on.

Since that's something that is going to be lost on the screen, I'm looking forward to how Stoppard handles it.

On a side note, I got over a thousand hits on the summary post this weekend...I'm guessing at least 98% were VERY disappointed! *lol*

I find Parade's End, in the aggregate, hard to bear. Once upon a time, there was an English gentleman: e was put upon by Jews and Scots (his brother's flat mate counting as both), Roman Catholics (his wife), Irishmen not otherwise classified (General O'Hara), and absurd American women. That it seems to me, is the burden of the book. Perhaps the Americans and other lesser breeds just stand in for the modern world. (And, Yes, I know about his last mistress, in fact distinctly recall her obituary in the NY Times not all that long ago.)

That is not to say that I didn't enjoy reading much of it, and recall chunks of it--the relative economy of shelling a field to bits vs. having it pulverized by agricultural contractors; the hobby of enumerating errors in the Encyclopedia Britannica.

Thanks for the information. Ford has been a favorite of mine, and I had enjoyed reading _Parade's End_, both times.

I will be watching for when it shows on DVD.

Just watched Episode 1. Spellbinding... most enjoyable TV I have seen in a long time.

Nice to know. So much of the novels takes place on the inside... I'm anxious to see how it was adapted.