The progressives would present objections, upholding the solidarity of the dogma and the priest, and then Don Pompeyo would have to take sides with the reactionaries, up to a certain point, and say, ‘Let us not confuse one thing with another, gentlemen, the very roots are diseased. The clergy is neither good nor evil, it is as it has to be.’ But on hearing this everybody would oppose him, some for defending the clergy and others for attacking the dogma. He was so right to say that he was utterly alone, that he was unique. From these arguments, which he sought and provoked every day, he affirmed that ‘his spirit—for want of a better word—emerged full of bitterness’ (which was untrue, as his guilty feelings made clear to him), full of bitterness because nobody ever thought in Vetusta, people merely vegetated. Plenty of intrigues, plenty of petty politicking, plenty of material interests (though not even these were properly understood)—but no philosophy, no elevation of the mind to ideal regions. There were one or two scholars, various canonists, a few jurists, but not a single thinker. There was not a thinker in town—apart from himself.
(page 445)

Vetusta the noble was scandalized, horrified. Behind looks of hypocritical compunction the worthy Vetustans concealed from each other the intimate pleasure which that great scandal, just like a novel, gave them, something to interrupt the eternal monotony of the sad city. Very few of them showed that they were pleased about what had happened. It was a scandal! Adultery, discovered! A duel! … A few hours after the catastrophe became known in town, Obdulia Fandiño swept out of her house wearing her largest hat and her most clinging skirt and her most rustling petticoats, to breathe the air of slander, to catch a whiff of scandal, to savour the after-taste of crime being passed from mouth to mouth like a bon-bon which everybody was licking, careful to hide the pleasure afforded by its sticky sweetness.
(pages 706-707)


La Regenta focuses on the provincial world Alas would have been familiar with in Oviedo. The previous post looked at the importance of literature in Vetustan life and Alas’ use of the arts to develop his characters. Alas spent a lot of time showing the poor cultural aspects of Vetusta, of which literature was only one piece. In this post I’ll touch on another aspect of the culture Alas focused on criticizing that I’ve mentioned several times, that of the desire of the upper classes to copy what they see happening in Madrid and foreign cultural centers in order to soften their small-town ways. The main focus of the post, though will look at the central criticism of the novel—his depiction of the moral corruption in the town.

The novel opens with the canon theologian, Fermín de Pas, ascending the cathedral bell tower to survey Vetusta laid out below him, allowing the narrator to provide an overview of the city. As the novel unfolds Alas zooms in on character after character so the reader understands what de Pas was examining. Alas pokes fun at his characters’ provincialism and petty behavior, or rather he lets them demonstrate it. There’s almost too much satire at times, bordering on meanness and losing some of its effectiveness. Fortunately Alas offsets this by providing a rich internal life for his characters so that they are not just caricatures. The Vetustans beclown themselves in many different ways. They imitate what they see and hear in Madrid and Paris. Trying to pass as educated and worldly, their behavior is often rude and boorish. Anyone wanting to be taken seriously in regard to books criticizes authors they have never read. [As an aside, sometimes it’s clear they have read something but completely miss an unspoken point: the archdeacon obviously has Herodotus’ anecdote in mind when he tells “my good Catholic people, ‘inhabitants of the banks of the Nile, those blind heathens whose wisdom impious authors tell us to admire, adored leeks, garlic, onions.’” (page 258)]

The frequent mispronunciation and misuse of words (especially Latin phrases) works its way into misquoting literature and mangling history. The Vetustans often demonstrate horribly bad taste, especially in their furnishings, which are often poor imitations of what they claim. They revere attending the theater but ignore what is happening on the stage. At the same time, they allow the theater building to fall into appalling disrepair. The Gentlemen’s Club, the organization and not the building, proves to be an empty shell to facilitate superficial camaraderie—there is nothing of substance inside. Oftentimes their provincialism overlaps with their moral corruption. I provided an extended quote in the previous post on the citizens’ use of Don Santos Barinaga’s declining health to attack the canon while doing nothing to help the ailing man.

If not done well Alas, in his skewering of a city rife with moral corruption, could come across as a scold. With the upper classes, almost everything seems to be done for sex. The things reserved for scandal, though, are not the actual trysts but failure to follow the acceptable protocol. Discretion only goes so far—everyone finds out about conquests sooner or later. Those that comment on trysts speak more from envy than from principle. For the upper crust religion is simply another dress to put on when appropriate. Attending services, such as the Christmas Eve mass described, provides a crush of people so that persistent gropes and pinches can occur and enjoyed under acceptable cover.

The clergy receives even more wrath from Alas’ pen. Most of the priests are petty tyrants, looking to protect and expand their influence. Their charges are good only for the gossip and secrets they provide. The canon Fermín de Pas turns out to be a very complex character, but the villagers’ charges of simony and vanity are well founded. He turns out to be ruthless in obtaining and wielding power, playing parishioners as pawns for his desires. Alas makes clear that it is the individuals at fault instead of the institution, though, taking pains to show some of the clergy (especially the bishop and Ripamilán) as truly interested in their mission.

Vetusta’s provincialism and moral corruption at all levels come together as major components for the central story—the undermining of Ana’s virtue. With the aristocracy so focused on sex, they admire and reward conquests. The city’s Don Juan becomes a role model for the marquis’ son (and this is actively encouraged by his mother). Ana didn’t really stand a chance since so much of the city was aligned against her. Beautiful and sensitive, she never fit in the social circles of her husband. But then she never fit in from an early age. Her governess, frustrated at not seducing Ana’s father, focuses her anger on Ana and believes the worst about her. Ana’s aunts are more practical in their guidance but their marriage pairing leaves a lot to be desired. Many of the citizens watch Ana out of envy, hoping she falls to their level—Vetusta is a town that improves itself by bringing others down. Several of the characters take an active role to assist Mesía (the Don Juan) in his conquest. Some do it out of spite and envy, others to strike at the canon and weaken his influence. Since he was Ana’s confessor, her behavior is seen as an extension of his power. Fermín even sees her this way. One of the more confusing examples of helping undermine Ana’s virtue comes from a religious widow, Doña Petrolina Rianzares. Even though the widow coordinates many of the good works in the city, she also provides the rendezvous site for private meetings between Fermín and Ana—what does she think goes on in her parlor?

Small wonder then, given such a perverse environment, that Ana falls. But I’m also interested in the regimen Fermín prescribed to her—it involves doing good works (involving people assisting her pursuer) and reading devotional material (that fails to inspire her long-term). Was his program wrong for Ana, insuring her failure? He recognizes her extraordinary soul, the depth of which has no equal in Vetusta. Yet his thirst for power never ceases and, even though he is one of the few people to appreciate Ana, he helps seal her doom. Among the many contrasts and echoes in the novel, their relationship (echoing the father/daughter feeling with her husband) feels one of the most unnatural. The Good Friday processional in which she participates drives her away from the church and closer to Mesía. At this point it’s only a question of time when Ana’s lack of fulfillment on so many levels will cause her to fall.

All quotes from the novel from the Penguin Classics edition shown below, translated with an introduction by John Rutherford. At the time of publication Rutherford was a Fellow of The Queen's College, Oxford. I've tried to maintain the spelling provided in the book, but automated spellchecking may change words to an Americanized spelling. 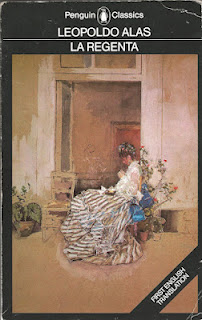