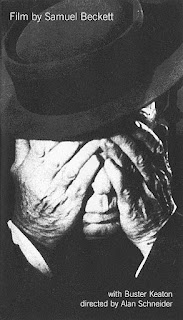 Samuel Beckett's only venture into the medium of the cinema, it was written in 1963 and filmed in New York in the summer of 1964, directed by Alan Schneider and featuring Buster Keaton. For the shooting Mr. Beckett made his only trip to America. The film, which has no dialogue, takes as its basis [Bishop George] Berkeley's theory Esse est percipi, that "to be is to be perceived": even after all outside perception—be it animal, human, or divine—has been suppressed self perception remains. Film has been awarded many prizes including the Film Critics Prize at the 1965 Venice Film Festival, the Special Jury Prize at the 1966 Tours (France) Festival, and the Special Prize at the Oberhausen (Germany) Festival in 1966. Film was edited by Sydney Meyers and the cinematography was by Boris Kaufman, both of whom were preeminent in their fields. Film was produced by Barney Rosset and Evergreen Theatre.

(From the VHS box description)

Many thanks to Frank Wilson at Books, Inq. for linking a post by Mark Bowles at the blog Piccolo. In a recent book acquisition, Mr. Bowles found a 1964 New York Times article about Buster Keaton working with Samuel Beckett on a film. Knowing nothing about this collaboration I began poking around and found there is a ton of information (or would be a ton if the webpages were printed) on Film. I'll limit myself on the links: 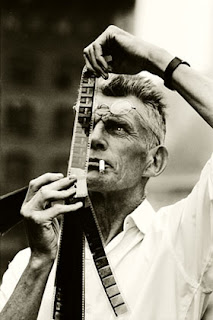 Beckett's own description of the film (from the Tin House link):

After watching it, my initial response was "Well, that was different," falling into the camp preferring the written version to the movie. R.C. Lamont's quote on the Wikipedia page may seem tongue in cheek (If Beckett were Shakespeare he might well have written: “To be seen or not to be seen, that is the question”), but it captures a large part of the movie and is consistent with Beckett's paring down of Shakespeare in his plays. As an aside, I wonder if some of the appeal of a silent movie for Beckett was not having to choose a language for the dialogue.

I warmed to the film a little bit during the second viewing, coming close to director Alan Schneider's feelings about it (also at the Tin House link):

“I was once told that the British director Peter Brook had seen it and said that half of it was a failure and the other half a success. I’m inclined to agree with him, although I’m not sure we’d both pick the same half. In fact, I change my mind about which half I like every time I see it.”

I would guess the appeal will be mainly for film students, fans of Keaton, or admirers of Beckett (especially since there are several touches that appear in some of his plays). My appreciation of Keaton's performance and some of the technical aspects increased with additional viewings. It helps that some ambiguities (and only some) are cleared up on repeated viewings. I would say my main complaint is that a movie (or play, or book) of ideas can be very uneven in its execution. Even with those caveats, it is an interesting way to spend twenty minutes—guardedly recommended.