The Faithful River by Stefan Żeromski 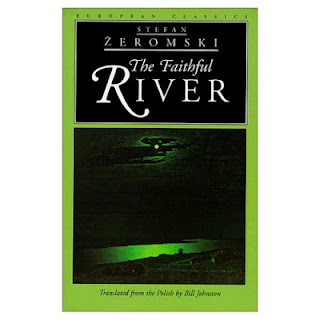 The Faithful River is set in the Kielce region of central Poland in the winter and spring of 1863, during the January Uprising. At this time the country of Poland did not exist; since the partitions of the late eighteenth century its territory had been carved up by Russia, Prussia, and Austria. In January 1863 a second armed insurrection (after the November Uprising of 1830-31) broke out in the Russian-occupied part of the country, with much of the fighting concentrated in the region where the novel is set. The Poles scored some notable victories but were ultimately crushed by the might of the Russian forces. The uprising finally collapsed in the fall of 1864. It was to be the last organized revolt against any of the occupying powers until World War I, which broke out two years after the publications of this novel.
(from the Translator’s Introduction, ix-x)

The Battle of Małogoszcz (February 24, 1863) precedes the narrative of the novel. Józef Odrowąż ,the lone surviving (and badly wounded) Polish soldier from his squadron, staggers from the battlefield to a nearby manor. Salomea Brynicka, a young woman looking after the manor for her guardians, and Szczepan Podkurek, the manor cook, take Odrowąż in and care for him. They tend his wounds and protect him from Russian troops and marauding Polish soldiers. Żeromski explores the meaning and impact of the war through the life of these civilians. Everything that Czeslaw Milosz noted about Stefan Żeromski in this post, good and bad, is on display in The Faithful River.

Odrowąż never asks Salomea why she exerts such effort to nurse him when the risks are so great but her reply to another question, about her father joining the Polish rebel cause, resonates throughout the novel:

"[T]he first duty of a Pole is to his fatherland, and only then to his family." She uttered this wise and conventional popular dictum with hieratic solemnity.
(page 33)

Impossibility and hopelessness make no difference. There is a martyrdom theme, especially in relation to freedom, which runs throughout the novel. (I’m seeing this in several Polish novels I'm currently reading and will note it again.) Żeromski doesn’t make things straightforward when it comes to causes or motivations, though. The Polish townspeople treat Odrowąż as if he were the enemy, fearing reprisal from the Russians if he is discovered. Their pathetic attempts at arresting him, along with their lack of help to find an important bag in the nearby river, paints them as pitiable instead of contemptible. The leaderless marauding Polish soldiers treat Salomea and Szczepan just as bad or worse than the Russian troops. The Russian commanders demonstrate courtesy amid their confrontations with Salomea during their efforts to find Odrowąż. Nothing is clear cut and there are no easy answers.

Żeromski includes plenty of symbolism in the novel, not the least of which is the River Łośna of the title. Running near the manor, the river provides the setting for sevearl key points in the novel. It washes the wounds of the injured Odrowąż, hides the important bag of papers thrown by a fleeing Polish insurgant, and receives the gift Salomea flings away in disgust. There is much more symbolism, some powerful, some cheesy. When Żeromski is good the scenes are quite moving, such as when Salomea provides one of several demands in the novel to provide meaning to the sacrifice required.

"Which of you will dare to say that he’ll defeat those who come here in the night to torment innocent people like us? And if you can’t defeat them, which of you dared to unleash the savagery that they brought here in their souls from the cruel snows? Do you have in yourselves a strength that is equal to their savagery and is capable of crushing that evil?"

Olbromski [a leading figure in the uprising] was silent. She gave a sob and went on with her accusations: "The Russian soldiers burn down manor houses and kill the wounded on the battlefields. The farmers tie up the insurgents—"

He interrupted her in a different, hard voice: "You prefer their savagery to wounds and death? That savagery will reign over you for all time!"

"It already does, in spite of all the wounds."

"The Polish tribe has found itself between millstones of destruction: the Germans and Moscow. It must either become a millstone itself or be ground up as fodder for the other two. There is no other choice. Any further discussion is superfluous."

There are many moments, though, that are almost too painful to read, such as the labored symbolism in a “slim birch sapling, which was soon to become a tree yet was still frail and thin.” Or the melodrama in this scene:

In those few days Salomea and Józef Odrowąż’s mother grew so close together that they became as one person. They communicated with each other by thoughts; above all, the feelings of each were an open book for the other. What for anyone else was only a word, a name, was for them the entire world. One understood the other’s emotions, could recognize them when they were merely referred to, could see them for what they were, and could move about them as if they were a land in another world, filled with hills, flower-covered valleys, cliffs, and deathly ravines. While the injured man slept, they sat in each other’s arms and recounted their impressions and their memories. A thousand times over Salomea divulged all the vicissitudes of the young man’s stay at the manor, all the stages of his sufferings, the mishaps, sorrows, and joys. For the mother it was all so fascinating and perpetually of interest that Salomea had to repeat it over and again.

They were incapable of talking about anything else. Their world existed only in the room where the young man lay. The more his life hung by a thread, the deeper, more ecstatic, and the closer to madness these two women’s love for each other became. With a single squeeze of the hand they conveyed more than could be expressed in a long conversation. With one look they told each other everything. When the sick man coughed or groaned, they ran like two wings of the same angel to tend to him, to mop his brow, and to comfort him—one openly, the other in secret, one with words and a tender touch, the other only with a look, a hand stretched out toward him, and a prayer.
(page 156)

In the novel Żeromski seems to run through a litany of things that must change, such as the importance Polish society places on nobility, while demonstrating the costs and burdens that must be borne in order to realize Polish autonomy. To put it in the context of the novel, Żeromski joins in with his characters to ask what they are fighting for. The final scenes prove to be moving and melodramatic, highlighting some of the costs involved the dream of autonomy. All in all, an interesting read. Since the novel is extremely emotional in its approach, good and bad sections are amplified—when good, Żeromski is very good. When bad…well, just read the above for one of many examples.

I plan to post on the 1980s Polish movie based on this novel (Wierna rzeka) soon. Update: the post on the movie can be found here.

An essay on the Polish national anthem (Dąbrowski's Mazurka) can be found here and may lend some insight to the emotions Żeromski targets. The English translation:

1. Poland is not yet lost
while we live
We will fight (with swords) for all/
That our enemies had taken from us.

Refrain:
March, march Dabrowski
from Italy to Poland
Under your command
we will reunite with the nation.

2. We will cross the Vistula and Warta Rivers,/
we will be Poles,/ Bonaparte showed us/ how to win.

3. Like Czarniecki to Poznan, after Swedish annexation,
We will come back across the sea to save our motherland

4. Father, in tears, says to his Basia: "Just listen,
It seems that our people are beating the drums."