A Book Forged in Hell: we are heirs of Spinoza’s scandalous treatise 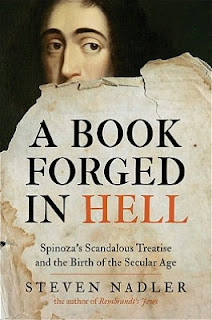 While I’m waiting for a replacement copy of The Faithful River by Stefan Żeromski (the last 25 pages were missing), I think I’ll post my scattered notes on another book I’m reading: A Book Forged in Hell: Spinoza’s Scandalous Treatise and the Birth of the Secular Age by Steven Nadler. When I become interested enough to read the book it's based on, even after Nadler admits it can be a bewildering work, you can tell he’s done a great job. Before presenting some quotes from the preface and opening two chapters, I’ll skip straight to Nadler’s conclusion:

To the extent that we are committed to the ideal of a secular society free of ecclesiastic influence and governed by toleration, liberty, and a conception of civic virtue; and insofar as we think of true religious piety as consisting in treating other human beings with dignity and respect, and regard the Bible simply as a profound work of human literature with a universal moral message, we are the heirs of Spinoza’s scandalous treatise. (240)

Nadler makes it clear that this book does not look at “Spinoza’s philosophy as a whole” (xv) or even go completely into his political and religious philosophy. Instead his focus is on Spinoza’s Theological-Political Treatise: what he says, why he says it, and why there was an immediate backlash against it. So what does the Treatise include?

Spinoza was the first to argue that the Bible is not literally the word of God but rather a work of human literature; that “true religion” has nothing to do with theology, liturgical ceremonies, or sectarian dogma but consists only in a simple moral rule: love your neighbor; and that ecclesiastic authorities should have no role whatsoever in the governance of a modern state. He also insisted that “divine providence” is nothing but the laws of nature, that miracles (understood as violations of the natural order of things) are impossible and belief in them is only an expression of our ignorance of the true causes of phenomena, and that the prophets of the Old testament were simply ordinary individuals who, while ethically superior, happened also to have particularly vivid imaginations. The book’s political chapters present as eloquent a plea for toleration (especially “the freedom to philosophize” without interference from the authorities) and democracy as has ever been pinned. (xi – xii)

Even though Nadler’s descriptions may be a little strong and he hedges his claims at times, the reaction Spinoza’s work caused is undeniable. Spinoza’s contemporaries viewed the Treatise as dangerous, causing one critic to opine that it was “’a book forged in hell,’ written by the devil himself.” (xi). Spinoza had been excommunicated from the Jewish community in 1656 and the Treatise was released anonymously in early 1670 (although apparently his authorship was quickly established).

The goal, as stated in the book’s subtitle, was

to show that “freedom of philosophizing can be allowed in preserving piety and the peace of the Republic; but that also it is not possible for such freedom to be upheld except when accompanied by the peace of the Republic and piety themselves.” The Treatise, in other words, is an extended argument for freedom of thought and expression in the modern state, as well as for the separation of philosophy and religion as a means to such liberty. The end of philosophy is truth and knowledge, the end of religion is pious behavior, or “obedience.” [Note for me to keep in mind: that’s one factor, but is that the “end” goal?] Reason, therefore, must not be the handmaiden of theology, or vice versa, and religion oversteps its bounds when it tries to limit intellectual inquiry and the free expression of ideas. (20)

To achieve that goal Spinoza attempts to undermine or deflate key religious principles, as mentioned above, in order to fight those (as he saw it) who constricted thought. The title highlights the central problem: what stays in the realm of the theological? What should lie in the political? There were works before Spinoza’s that addressed parts of these questions. Pierre de la Court’s The Interest of Holland (published 1662) argued “that peace and economic prosperity were best fostered not only by a decentralized, republican system of government but also by a separation of church and state.” (28) Several English works looking at freedoms and separation of spheres of influence had preceded Pierre de la Court’s work. John Milton’s Areopagitica (1644) included a subtle entreaty for freedom of speech. Thomas Hobbes’ Leviathan (1651) was much more forward with his arguments. Even though he argues that a sovereign provides the most security and power, religion’s role in society should not be a separate institution but fall into the civil realm under the sovereign. Many of Hobbes’ arguments undermine religious principles and beliefs, a similar tactic in the Treatise.

Nadler points out how Spinoza’s Ethics, which had been temporarily shelved, and the Treatise complement each other:

To the extent that a person becomes more free as an individual and more rational in his beliefs, the less likely he is to fall prey to superstition and indenture himself to religious sectarians. And the more a state is liberated from ecclesiastic influence and governed by liberal democratic principles, the more freedom there will be for citizens to engage in philosophy and discover the truths that will liberate their minds. Both the Treatise and the Ethics, in working together to make this case, offer a profound critique of religion: the former from a theological, political, and historical perspective, the latter from a metaphysical one. … What Spinoza wants to see is a politics of hope (for eternal reward) and fear (of eternal punishment) replaced by a politics of reason, virtue, freedom, and moral behavior. The Treatise and the Ethics each makes its own particular contribution to this goal. (33-34) 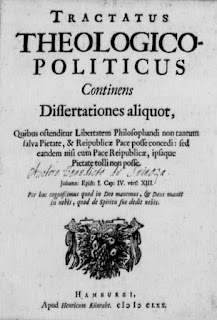 Picture source
Posted by Dwight at 11:32 AM

Long long ago I worked by way through the Ethics of Spinoza-I remember being impressed by his extreme dedication of logic and reason.