Instant movie for the weekend: Street of Crocodiles by the Quay Brothers 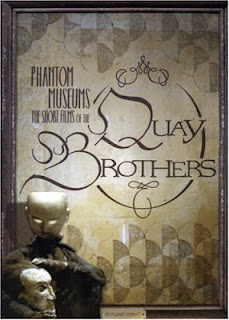 If you have access to Netflix streaming be sure to check out Phantom Museums: The Short Films of the Quay Brothers, in particular the 20 minute "Street of Crocodiles" (versions of this are available on YouTube, too). The Bruno Schulz story of the title focuses on deceit—fabrications by others and by the self. Starting with the image of an "old and beautiful map" of his father, the narrator tells about an imagined visit to the district called Street of Crocodiles and how nothing there is as it seems. Even the memory of such a visit turns out to be false. "It is all nothing more than a fermentation of desires, prematurely luxuriant, and therefore impotent and empty." Efforts to revisit previous stops are fruitless since it was all a sham and things didn’t happen as remembered—the district "was our town’s concession to modernity and big city debauchery. It seems we could afford nothing better than a paper imitation, a photomontage made of cuttings from last year’s mouldered newspapers." (from John Curran Davis’ translation)

The Brothers Quay use the story as a starting point but veer wildly from this basis. Even so, the film feels right in line with Schulz’s stories. The movie shows a freed puppet’s exploration of his grimy surroundings, where everything is imbued with life. Highly recommended, as are other features on the disc.

For more on the Brothers Quay and Street of Crocodiles:

Senses of Cinema has several articles on the brothers, including an interview:
An overview
Fetish, Filth and Childhood: Walking down The Street of Crocodiles
Through a Glass Darkly—Interview with the Quay Brothers
A quote from the interview:

AH: I read Schulz’s Street of Crocodiles after having seen your film. It’s funny how Schulz’s text works like a map on which you placed different elements.

Quays: In fact, we took a lot of elements from different stories and sort of pulled it together. We gave the story a theatrical dimension gleaning a lot of other things from Schulz, and even other things which we thought were Schulzianesque, which we thought would work in terms of a Schulzian universe. He didn’t have to write about such and such, it’s all blurred. We’re not sure what belonged to us and what was in the texts. 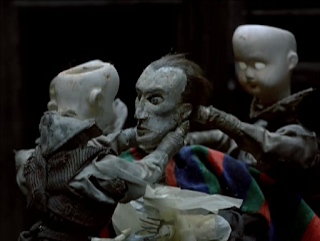 Email ThisBlogThis!Share to TwitterShare to FacebookShare to Pinterest
Labels: Bruno Schulz, Movies, The Street of Crocodiles

Thanks for the tip.
Enjoyed the Ronnie Lane bio. Especially 'April Fool'which was new to me.

Glad you liked it. I don't see this as an ongoing series unless I find something as good as that one...or as weird as this!

Well, it's been a great service so far. Thanks Dwight.