From Joseph Roth: A Life in Letters, translated and edited by Michael Hofmann.

The last few years of Roth’s life saw many of the same themes as already posted, and some extended thoughts on these subjects:

• A lot of talk of politics and how many, especially “those who embodied the ‘word’s conscience’ were themselves mute and expectant” for so long and “lost all credit.” (Letter 349)

• His poverty and the need to provide for his extended family. Despite all of his begging, Roth proves to be generous to others, too (see Letter 353, for an example)

• His drinking: “Don’t worry about my drinking, please. It’s much more like to preserve me than destroy me.” (Letter 358)

• One area that received more attention in the letters from this period was the film business and whether novels were “filmable” (Letter 386). I guess he got over his opinion that the cinema was evil (see Letter 270).

• Another area receiving more attention centers on Roth’s escape through writing: “I write every day, simply so as to lose myself in fictional destinies.” (Letter 386 and see 371 below)

• Roth’s lack of acrimony to this point has made his rants and pleadings palatable, but his resentment, not just at the world situation but with his own fate seems to increase, something he clearly recognizes: “Forgive me my bitterness, I would tone it down if I could.” (also in Letter 386)

• While his despair in previous letters seems to be an act, at least to some degree, there seems to be more and more basis for Roth’s despair as we move through this time period.

• Family matters weighed heavily on him, with the burden of financing his wife institutionalization and his companion (Mrs. Manga Bell) and her children taken care of taking their toll. Letter 405 to Blanche Gidon has Roth unloading on both Mrs. Manga Bell (for steadily refusing “to adapt to the rules of my life”) and the children (now of legal age, his anger focused on their ungrateful nature in calling him boche).

• There are few letters in the book between the annexation of Austria by Germany (March 1938) and his death (May 1939). A couple of the letters reference his attempt to help some of the émigrés (“I am overloaded with Austrian matters, refugee committees, and the like” in Letter 450).

My Jewishness never appeared as anything else to me but an accidental quality, like, say, my blond mustache (which could equally well have been brown). I never suffered from it, I was never proud of it. Nor is it the fact that I think and write in German that bothers me now—but the fact that 40 million people in the middle of Europe are barbarians. I share this sorrow with quite a lot of other people, including most of the remaining 20 million Germans, inasmuch as these things can be quantified. I believe in a Catholic empire, German and Roman, and I am near to becoming an orthodox, even a militant Catholic. I don’t believe in “humankind”—I never did—but in God, and in the fact that mankind, to whom He shows no mercy, is a piece of shit. … I will do all in my feeble power to bring about a Habsburg return. … Mine is not hatred, but righteous fury. And I will be proved right, because Hitler won’t last more than another year and a half, and then, slowly but surely, we shall have a new German Empire. … The Habsburgs will return. Please don’t deny what’s all too evident! You see I’ve been right thus far. Austria will be a monarchy. I’m right. I foresaw the madness and excess of Prussia. Because I believe in God. And you, you didn’t see it, because you believe in “humankind,” a concept so unclear that by contrast with it, you could think to meet God on the nearest street corner.

Roth upbraids Zweig in Letter 350 (19 August 1935) for his tardiness in understanding what was happening in Germany and his feeble proposals:

We’ll protest: fine! Another protest. A good protest! And people will sit up and take note. And then what? What is it we want to achieve? You underestimate or ignore a couple of major things:

1. the urge to humiliate Jews didn’t begin yesterday or today; it’s been part of the platform of the Third Reich from the very start. Everyone knows that. Streicher is no different from Hitler, and you didn’t need to wait for Streicher to make his way from Nuremberg to Berlin! The founding principle, so to speak, of National Socialism, is none other than contempt for the Jewish race! Why did it take you this long to grasp that? How come you didn’t get it 2 years ago? 2 ¾ years ago? That bestiality [a word Roth used almost from the beginning when describing the Nazis and their actions] was there from the start. It didn’t suddenly set in a couple of months ago, the vilification of Jews. We were insulted and humiliated from Hitler’s very first day! Why is this protest so tardy?

2. … But do you really think a manifesto can do something so late in the day?

I am not in a tizzy about the letter from […]. In view of the approaching end of the world, it’s no big deal. But even then, in the trenches, staring death in the face 10 minutes before going over the top, I was capable of beating up a son of a bitch for claiming he was out of cigarettes when he wasn’t. The end of the world is one thing, the son of a bitch is another. You can’t put the son of a bitch down to the general condition of things. He’s separate.

Stefan Zweig to Joseph Roth in Letter 366 –I’m sure this went over well with Roth:

My dear good fellow, don’t forever by arraigning the times and the wickedness of other people, admit that you bear some responsibility for your state, and help us to help you.

Roth, in Letter 371 to Stefan Zweig (17 February 1936) sounds the theme mentioned above that writing was an escape from his unordered and pressure-filled life, although the deadlines and the need to receive advances provide their own tensions:

I think I can only understand the world when I’m writing, and the moment I put down my pen, I’m lost.

Landauer wants to publish the new novel in summer, he claims it’s a good time, and then I could hope to get another contract in the autumn. There are supposed to be German Jews abroad then buying books they won’t find at home.
(Hofmann’s note: I don’t know what’s more striking here—to be so reduced, or still to be calculating.)

Letter 393 to Stefan Zweig (29 May 1936) gives details on Roth’s physical condition. While he always grumbled about his health in general, he begins to include more specifics on his ailments. While complaining about his poverty, he makes clear his priorities:

I am very feeble, and barely able to walk. There’s no particular illness. Every day brings with it different symptoms. If I don’t vomit spleen and blood, then my eyes are inflamed, or my feet are swollen. Palpitations, heart pain, shocking migraines, teeth falling out. It sometimes seems to me that nature is kindly afterall, because it makes life so rotten that you positively long for death. [Roth would live for another three years] … I managed to get the price for the room down to 1 gulden today, but there’s nothing more I can do. I have to drink wine now, no more schnapps for weeks now.—My room looks like a coffin; but a bottle of wine costs a gulden. I own 2 suits and 6 shirts. I wash my own handkerchiefs. I’ve never learned to iron shirts. I look completely dreadful.

You already have a clear notion … of the inadequacy of all human idealisms that you bathed in from the time of your youth, and in which you have steeped yourself. You’re bound to be disappointed. The nonviolence of Mahatma Gandhi is just as unhelpful to me, as Hitler’s violence is detestable. 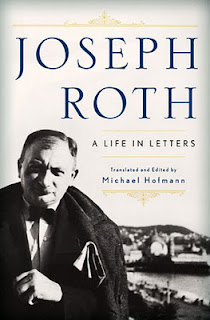