The Physics of NASCAR 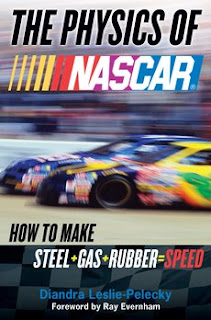 The Physics of NASCAR: How to Make Steel + Gas + Rubber = Speed
by Diandra Leslie-Pelecky
Foreword by Ray Evernham

A few Saturdays ago I was sitting in the library while my boys were deciding on which books to check out when I saw this book in a science display. After leafing through a few pages I thought it might be a fun read (something I needed) and checked out the book.

Over forty-six years ago, Tom Wolfe wrote about the attraction stockcar racing held for its fans. In a couple of places in the article, Wolfe describes some of the intuition and seat-of-the-pants experimentation by drivers and their crews to gain an edge. In-depth scientific and engineering studies have replaced the haphazard approach in order to improve every aspect of a racecar. Leslie-Pelecky, a professor of physics at the University of Texas at Dallas, breaks down the science behind why NASCAR and race teams do what they do.

The book begins with concentrated looks at various components that come into play in racing—many of the concepts and particulars will already be familiar to anyone that has watched more than one race or has taken chemistry and physics classes. The level of expertise and prodigious amount of work that crews do off the track is impressive and several topics get down to the atomic and molecular level. When Leslie-Pelecky moves the story to the track for practice, qualifying and a race, the book comes alive and shows how all the parts work together (or often don’t). Like many fans of the sport, she realizes she has gone from objective observer to a member of the race team she follows.

With so many standardized and regulated features on the cars, small changes in the dimensions crews have freedom to vary can make a big difference. In addition to covering many topics on how to increase speed, the book also has several chapters on the evolution of safety features of the car and the track. After all the precise measurement and exact preparation for a race, though, deciding factors in a race can boil down to instinct, experience, and luck. As Leslie-Pelecky points out (usually in looking at different materials but it applies to almost every aspect) every choice comes with a trade-off, something being sacrificed in order to improve another area.

My only real complaint is that I wish several of the topics had been more in depth. Fortunately Leslie-Pelecky has set up a website that provides additional information on topics not included in the book as well as links to educational material and videos.

Overall a fun read that explains the physics and chemistry in relatively easy terms. And if it makes it sound like I know what I’m talking about when the boys ask a question about racing, so much the better.