Too Loud a Solitude 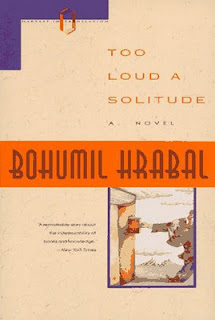 After seeing glowing reviews of the works of Bohumil Hrabal, I thought I would read one of his books. Expect to see several more posts on his works over the next few months—I thoroughly enjoyed Too Loud a Solitude. Welcome to the world of Haňtá, a trash compactor in Prague, turning out compressed bales of paper for the last thirty-five years. Haňtá reveals that his two loves in the world are books and beer, items he feels are necessities for his work and his learning. It’s questionable at first whether he understands the books he rescues from the compactor and takes home to read. It becomes clear that he not only understands the books, they have become part of him, leaving a mark on his soul. No longer able to tell which “thoughts come from me and which from my books” (page 1) he sees himself as a bale of compacted thoughts he has received from his books. Haňtá makes use of his learning to add to his unique way of looking and acting in the world around him, although his subtle subversion, born of a naiveté despite the self-scholoarship, sets him apart from others.

Haňtá hopes that the books he saves from the compactor will tell him more about himself. His apartment becomes so filled with books that he can barely maneuver around the many stacks. He has added shelves everywhere, including above his bed where the weight of his books would crush him in his sleep if they happened to fall. Haňtá accepts whatever comes his way with unquestioning gratitude, highlighting a tension between his ideals and what he is willing to do to obtain them:

I don’t like baths even though we have a shower room right behind the boss’s office, because if I had a bath I’d be sure to come down with something. I have to go easy on the hygiene, working with my bare hands: I can’t wash them until night, because if I washed them several times a day my skin would crack. But sometimes, when a yearning for the Greek ideal of beauty comes over me, I’ll wash one of my feet or maybe even my neck, then the next week I’ll wash the other foot and an arm, and whenever a major religious holiday is in the offing, I’ll do my chest and both feet, but in that case I take an antihistamine in advance, because otherwise I’ll have hay fever even if there’s snow on the ground. (pages 25-6, all quotes from the Harvest Book/Harcourt, Inc. edition, translation by Michael Henry Heim)

Hrabal’s condemnation of censorship saves the most bite for its indoctrination of others to participate. Haňtá believes “inquisitors burn books in vain. If a book has anything to say, it burns with a quiet laugh, because any book worth its salt points up and out of itself.” (page 2) The paper trash he receives to compact regularly includes books, but they are mostly discarded works (although the works from the Royal Prussian Library proves to be a special exception). Not until he visits a new powerful compactor does he see organized censorship—entire runs of books, still in their packing boxes, fed into the machine. Hrabal’s picture of the visiting schoolchildren, hurting themselves while enthusiastically ripping apart the books to be fed into the compactor, is disheartening. Even so, Haňtá scurries home and tries to mimic the bigger, more efficient machine. He has seen the future and tries to maintain his place in such a changed world, regardless of the cost. The joy of the early pages and his fond reminiscing has been replaced by gloom. Haňtá’s abandons turning his bales into works of art (he used to place a book in the middle of the bale opened to a particular page, then cover the bales with posters of art masterpieces) in favor of increased volume, leading to a predictable, but still powerful, ending.

Along the way we meet many wonderfully drawn characters as colorful as Haňtá:

- Haňtá’s uncle, retired from the railway, who installed a signal tower and rail line in his backyard, (shades of Tristram’s Uncle Toby) where his friends can play with a secondhand locomotive and get just as lubricated as the engine.

- Marie, one of his early loves, who can’t seem to escape disastrous run-ins with feces.

- The Gypsy girl who briefly moved in with him, afraid that Haňtá’s kite would fly away with her. (Hrabal draws very affectionate portraits of his Gypsy characters in this book.)

- Haňtá’s old friend, who celebrates getting his boss in trouble through a two-day sobriety by getting drunk.

- The mice, whether in his work basement or in the sewers in the city. Haňtá views them in the same relationship as God views humans.


Highly recommended and as I mentioned earlier I plan to read and post more on works by Hrabal. Here are some links for those interested in exploring more about the author and his books:

Article by Mats Larsson, with excerpts from different works

The 2007 film adaptation, using puppets, of the novel--not a comprehensive treatment of the book and some liberties are taken to explicitly highlight the political aspects of the novel. I enjoyed it even with the changes.

Update (16 Oct 2020):
Radio Prague International named this one of its Czech Books You Must Read. It's an insightful and informative post that I highly recommend. Here's a comment about the book from Esther Peters, Associate Director of the Center for East European and Russian Studies at the University of Chicago:

“The world would be a better place if more people read this book. It is an incredibly engaging read. It is so much fun and yet it is incredibly intellectual. It makes you think. Every time I read it there are new things to think about and it is one of the few books that I think combines these aspects so perfectly that you can delve into it, love reading it and just enjoy the process of reading.

“It is about knowledge, language, process and ritual, but it is also just a good story. That combination of things is quite rare I think. It challenges you to think, but keeps you entertained at the same time.

“Every time I read it something new pops out. I think that is another thing. It changes with the reader. I think that it probably changed with Hrabal as he wrote it. It is something you can take with you. It is a companion.”

Email ThisBlogThis!Share to TwitterShare to FacebookShare to Pinterest
Labels: Bohumil Hrabal, Too Loud a Solitude